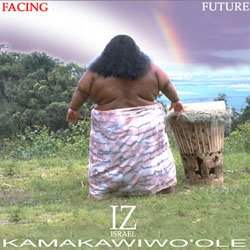 Braddah IZ (aka Israel Kamakawiwo’ole) is one of Hawai’i’s best known musicians.

His simple ʻukulele sound and amazing voice has captured the hearts of millions around the world. While he passed away in 1997, IZ’s music lives on to inspire the next generation of ʻukulele player.

Facing Future has a great selection of Hawaiian and Jawaiian (Hawaiian reggae) songs that are a great contemporary intro to the sounds of the islands. The opening track, Hawaii 78 Introduction, is the first of the powerful songs that bookend the album. An anthem for Hawaiian sovereignty, Hawai’i 78 tells a sad tale of the Hawaiian in this new era of Western ways in Hawai’i.

The next few songs showcase Israel’s proficiency in Hawaiian from his time spent in the Makaha Sons of Ni’ihau. It’s also a textbook look at how to implement effective ʻukulele work in the genre.

At heart though, IZ was a rocker. As he got more daring, his albums began to incorporate more of an upbeat reggae influence. This can be heard in his rousing rendition of Take Me Home Country Road and Del Beazley’s Maui, Hawaiian Sup’pa Man.

Almost every tune on Facing Future calls out to be brought to a jam session. Even the most Hawaiian-language-shy ʻukulele player will try to sing the words on the B side of the album. The simple instrumentation makes the songs accessible and allow the talent of the man to shine through.

Of course the ever famous Somewhere Over the Rainbow/Wonderful World is on this album. A great song, allegedly recorded in the wee hours of the morning in one take. This is the tune that made Bruddah IZ an almost-household name. Beautiful, but overplayed.

A must have for any Hawaiian ʻukulele enthusiast.