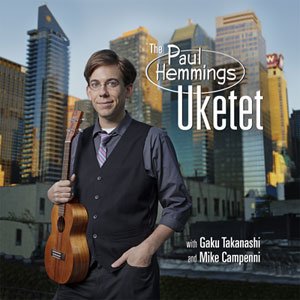 11/1/11 ~ With so many new ʻukulele players appearing on the scene, it can be daunting to sort through and decide what artists are really original, and what ones are just repackaging the same-ole, same-ole. The Paul Hemmings Uketet definitely falls in the “original” category. Playing mostly jazz-style songs on Introducing… The Paul Hemmings Uketet, Paul – ʻukulele, Gaku Takanashi – bass, and Mike Campenni – drums, jam their way through 13 substantial tracks (the shortest is 3:54!). With Paul’s snappy picking sound and bold chord punches, even the slow songs are lively. Bass and drum solos abound for an album made in an era where the backup band usually stays “the backup band”. When Gaku and Mike aren’t ripping it up on their own, they are laying a groovy foundation of walking bass lines and laid back, cymbal-heavy drums. It sounds as if most of the songs were recorded live. If they weren’t, the band certainly kept the spontaneous feel. Only three of the songs are Paul Hemmings originals, but that’s okay because all of the covers are cleverly arranged.

The album starts off with an original called Blue Uke. Personally, I think it sounds more like “Jazz Uke”, but either way it’s a groovy song that gets your foot tapping. This kind of music just makes me scratch my head and wonder: “How do you make so many ‘wrong’ notes sound so good?”

There are three Beatles covers on the album; my favorite is the swinging version of Here Comes The Sun. Its arrangement is really smooth and you can feel the contour of the melody – it’s very natural.

Although jazz seems to be the focus of this album, there are lots of places where the style takes a detour. The Chicken is a good example of the Uketet’s take on the blues, starting off with a fat drum groove and incorporating plenty of pentatonic licks and Hendrix-sounding chords.

Touching briefly on the reggae genre, the Uketet covers Bob Marley’s No Woman No Cry. The ʻukulele solos are really great on this song and the outro has some really tight harmonized ʻukulele lines. Overall, a pleasing song with a straightforward arrangement.

I appreciate Paul’s nod to the roots of his instrument with Papakea – the second original. It’s undoubtedly a Hawaiian-style song, but with with some jazz thrown in. The “pink panther” drums are kind of funny to me, but I guess it’s typical for this hapa-haole style.

I always think of James Hill when I hear One Note Samba, but the Uketet’s version is probably a more traditional approach. A bit of additional percussion really adds to the Brazillian feel. One break in the song finds Paul pulling off a flurry of notes that sound like they could be tapped!

Visit the Uketet site for information on where to buy a copy of Introducing… The Paul Hemmings Uketet.