I no longer recommend this pedal.

The controls started acting funny last year. It would randomly make switches and the looper mode would turn on by itself or wouldn’t turn off. I might have thought that it was an isolated incident, but my other Zoom pedal (MS-50) also started going haywire at around the same time.

I’m into quality that will take 25 years of touring. Guess this isn’t it. If you need something to get started with, it might be a cheap way to get in the game with tons of options, but if you’re like me, you might be bummed in a few years when it breaks. 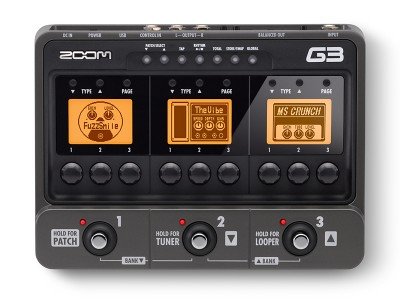 When it comes to performing, the less you have to lug onto stage with you the better. If you can get away with just your ʻukulele and a cable, then by all means go that route. But if you’re like me and really want to have some effects onstage, every pedal adds to your setup time. So simplicity counts.

I’ve been looking for a compact acoustic instrument oriented multi-effect, but since the retirement of the Boss AD-5, there isn’t much to be found. After some searching I stumbled across the Zoom G3 multi-effects unit. It’s a bit bigger and more complex than I was looking for, but I had to try it out.

Housed in a small 9″W x 2″H x 6-1/2″L, mostly metal enclosure, the G3 can run up to six effects simultaneously. You can choose from over a hundred different types of reverb, delay, modulation, distortion, plus amp models. There are ten banks of ten presets that you can edit and save you favorite sounds in. In addition to the effects is a tuner, 40-second looper, and simple drum machine. For those interested in recording, the G3 has a USB out for recording straight into your favorite DAW. It comes with an AC wall plug and some low-end recording software.

My favorite thing about the G3 is its simplicity. There are almost no menus to scroll through – all options are organized with simple “pages” so you can’t get lost. To change the effect type in one of the three sections, all you have to do is push either the up or down “type” buttons. Once you pick the effect type you want, the three parameter control knobs tweak the sounds. A second or third page will give you control of additional parameters, if needed. The virtual position of each knob is shown on the display accompanied by a numerical amount that can be handy for setting delay times to milli-seconds, etc. Every change you make to effects is saved automatically for each patch.

You turn each of the effect sections on or off by stomping on one of the solid footswitches. To navigate through saved patches (previously set up effect combinations) you hold down the left footswitch to enter the “patch mode”. Here you use the middle and right footwitches to scroll up and down through the presets.

Holding down the middle or right footswitch takes you into the tuning or looper modes. The tuner turns on after you hold down the middle footswitch for a second, but doesn’t mute. Hold down for another second and the output will mute. It’s fairly accurate and displays the note name and big arrows to guide you up or down. For finer tuning, the seven buttons along the top light up to show how far flat or sharp your instrument is. The looper mode is sweet and simple. Press the left footswitch to start recording and again to play, once more to overdub. Stop the loop with a tap on the middle footswitch. There is 40 seconds of record time available.

Another awesome thing about the G3 is that you can plug it into your computer and update its internal software. Sometimes the updates are small bug fixes, but some – like the recent 2.0 update – totally rework the coding of the system to give you more options.

Great. Compared to my Line 6 M5 multi-effects, MXR Carbon Copy delay, and TCE Hall of Fame reverb, I can honestly say that I like the sound of most of the G3’s effects more. They seem smoother and more three-dimensional. The delays sit back and fill out your sound, but don’t overpower – even on higher settings. The reverbs are great. With normal settings like hall, room, mod, etc… and an almost-too-detailed “HD Reverb” you can get any sort of space sound you need.

I admit to being over-obsessed with effects pedals. For many years I’ve spent much time wishing and wondering after that one new gadget that would make my plugged-in sound better.

Be sure to read the update at the top of the page. I’ve since moved on to more reliable pedals.