Tobias Elof is one of my favorite ʻukulele players. Always doing his own thing, applying music how he sees fit and it best relates to him. I feel he’s one of few true artists on the ʻukulele scene. His newest release with partner-in-crime and bass player Nicolaj Wamberg is called Byen Sover (The City Is Sleeping). The Danish duo go by the simple: Elof & Wamberg and, except for two traditional pieces, write everything you hear on the album.

The first thing you’ll notice when listening to Byen Sover is how organic and real it is. The format, for the most part, is simple: instrumental ʻukulele and upright bass – a perfect complementary pair. Elof & Wamberg have such a liberating sound because of it. The instruments are never fighting for space and each can move around freely without worry of stepping on toes. 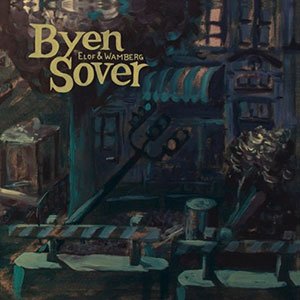 I love the feel of the recording: raw and live. You hear two musicians just playing music with zero smoke and mirrors. It’s so intimate that you can hear the guys breathing, humming, and vocalizing in certain places of the tracks. I, personally, love this. You know exactly what you’re getting and can appreciate the musicianship at face value.

Byen Sover begins with a spacey intro that pedals on the same motifs for quite some time, adjusting your ears for the unique approach to come. Unlike many albums, this Elof & Wamberg record lets its charm rest in the simpleness of the music. It sides the mellow feel and the overall tone would be perfectly suited as background music. But because of the beauty of the songs and excellent musicianship, Byen Sover never feels like background music – quite a feat that speaks to the genuine quality of their music.

Following is the title track, Brudestykker, and Verden, three lovely mellow tunes that showcase what Elof & Wamberg do best. Tobias drives powerful, crisp folk-reminiscent melodies on his ʻukulele and Nicolaj follows him with relaxed, slippery upright bass at its finest.

The first place on the album where the instrumentation and production takes a left turn is on Maneskin, a reggae-influenced piece. We hear an obvious dub-delay effect that grabs your ear on the repeats. Despite this tech-y addition, the driving bassline remains raw and rootsy, keeping the feel we’ve been treated to up to this point. A fiddle also joins the mix to highlight a middle-Eastern melody while Elof holds down the reggae skank rhythm.

A short piece called Varbrud serves the part of an interlude that once again conjures the feel of the intro. It’s a nice touch that sort of spans the “A” and “B” sides.

The standout tune on Byen Sover is the hauntingly beautiful Erindring. Tobias conjures a rolling, flowing melody out of his ʻukulele with the cherri-picking technique that he learned from James Hill and then promptly rebuilt to fit his Nordic folk style. While most of the tune has a bittersweet sort of feel, the breakdown in the middle turns more upbeat. Erindring is one of those rare tunes you could put on repeat for an hour and not get bored of. Bravo!

Byen Sover hits the home stretch on Menuet, a dreamy, lullaby feeling tune that drops back into the mellow feel that runs deep on this record. It’s a long piece, but it gets the grandeur of a mini string section at the end and an epic ʻukulele fade out. Finishing off the album is a short piano piece that’s a bit out of place and disorienting, but it’s pretty, I guess…?

All in all, I loved Byen Sover. It’s a refreshing statement from the other side of the ʻukulele world that doesn’t follow any pre-plotted course. It meanders through new, pleasant sounds and captures the imagination with a gentle grace. The quality of playing is top notch and the songs are beautiful. And, while each of the songs are beautiful by themselves, it’s the album as a whole that tells a stronger story and makes me a huge fan. Five stars!

Byen Sover can be streamed on Soundcloud.