When I first heard Daniel was finishing up a new album, I was excited to get hold of a copy so I could hear what he was up to. He graciously sent me the MP3s before they were released so I could get a sneak peek. 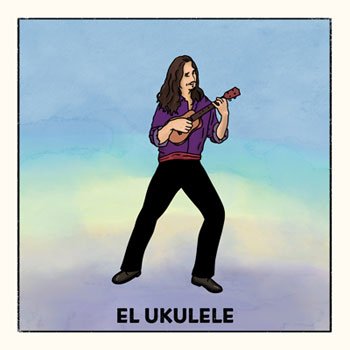 (Daniel, in addition to being a recording artist, is also an educator and has written one of the best ʻukulele books I’ve seen in years, Arpeggio Meditations for Ukulele.)

The artwork and theme presumably come from Ward’s time growing up in New Mexico. It’s a fun look that doesn’t take itself too seriously and represents the artist and his quirkiness well.

The recorded sound of the ʻukulele is very genuine. No smoke and mirrors or noticeable “doctoring” of the audio. It sounds like you’re in the room with Daniel as he’s just jamming. His technical skill comes across vey well in the transparent setting and you can hear the instrument working under his fingers – a real treat that many uke recordings fail to portray.

While some of the cover song selections might seem a little mundane at first, Daniels mastery of arranging brings each tune to life via clever layers of ʻukulele parts. Usually multiple ʻukulele tracks build up in the same frequency range and wash out the sound, but Daniel carefully shapes each part to stay out of the other’s way. This creates a big feel without sounding muddy and without using many instruments other than the uke.

El Ukulele begins with Nema, the first of three original instrumental pieces. It’s a beautiful beautifully harmonized tune with a driving, trance-y bassline. The song’s repeating motifs make you wonder if you’ve been listening for a minute or an hour.

The other two Ward instrumentals are Aire for the Cat Rancher and Istanbul. Contrary to what images the title might conjure, Cat Rancher is a short, classically inspired piece for solo uke that drifts on a free feel that is probably the album’s most beautiful musical moment.

Istanbul however, paints a picture like its name. Middle Eastern rhythms and percussion drive the moody minor tune in which Daniel shows off some of his flamenco chops. An exciting and new setting to hear the ʻukulele in, for sure.

Contrasting the original work on El Ukulele are six covers ranging in genre from the slow-jazz Beatrice to pop (Norwegian Wood) and Hawaiian (Aloha ‘Oe). Each is a sweet reworking in which Daniel coaxes familiar melodies out of the ʻukulele in his own signature way.

I really like the feel and punch of Route 66. It features some of the more intricate “band” playing with synchronized stops and runs that complement the spanish feel.

The most “eye-roll worthy” song on the album is Ward’s parody of the Paul McCartney and Wings hit Silly Love Songs. It’s the only seriously corny turn that El Ukulele takes which is sort of unfortunate since the rest of the album presents such a strong musical statement. But I’m kind of a fuddy-duddy when it comes to sappy ʻukulele gags.

The remaining two songs are vocal originals on which Daniel pulls his more serious vocal tricks out of the hat. Darling is a tender, folk-y piece that suits the mellow sound of his voice well. I could see myself really digging a whole album featuring Ward’s sound in this setting. The other is Lucila, an upbeat, Cuban sounding song with some fun ʻukulele picking patterns and tremolo instrumentation.

I don’t tend to listen to much ʻukulele music, but El Ukulele is the freshest ʻukulele album I’ve heard in a while. It takes the ʻukulele to new places and sounds without alienating anybody or anything by being intentionally weird. Covering many of the bases, I would recommend this album as an accessible intro to what the ʻukulele can do and also as an inspiration for the skilled player looking for a role model and ideas for what to try next. I’m a big fan.

El Ukulele is available as a physical CD or as high-quality .mp3 or .wav files directly from Daniel’s site.