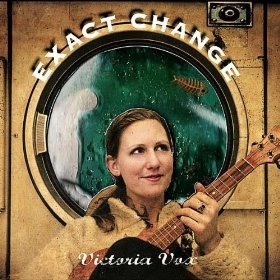 Victoria Vox‘s newest offering, Exact Change, is quite the package – literally. The paperboard album cover depicts an old washing machine with water seen through the glass – with actual water. This is done with a heavy plastic insert that floats behind the image of Victoria’s head. In the water floats fish bones. The graphic design work is great and follows the laundromat theme throughout the paperboard fold-outs complete with push-in coin slots.

Exact Change is a very well-rounded album. It has a nice sound, nice songwriting, and in the case of some songs, a message. Victoria’s writing style would be considered kind of pop, I guess, but with vintage flair. Outside of a laundromat, I could easily imagine some of the songs being played in an old theater.

Vox’s ʻukulele playing stays in the realm of accompaniment except on the “Intermission” where she breaks out some leads. Every time I hear Victoria’s voice I am impressed and this album is no different. She sings as if she is smiling the whole time. The tone of her voice is just so effortless and warm. It should also be noted that Victoria wrote all but two of the 12 songs on Exact Change.

The first half of the album is more upbeat than the second and hosts in my opinion what are probably the highlights of the album. Right off the get go is “Summertime” with the trumpet intro played by Vox. Upbeat and funny, Victoria takes a jaunt to “your house” and “Loch Raven”. “Mother Nature” is my other favorite on the A side. It contains a driving rhythm and foreboding message calling for a turn away from the current path-to-self-destruction people are on. The best part of the song for me is the dropped snare hit going into one of the last choruses that throws the song into what feels like half-time, but then whips back to the original tempo.

Dividing the two halves is the “Intermission“; an instrumental piece that sounds like, well, an intermission from past days when a theater was a theatre. Listen for Victoria’s legendary “mouth-trumpet”.

The B side contains the two cover songs – “French Café” by Herb Ohta/Jim Belof and “The Birds” by Anne Chandler – both are nice tunes. “La Musique” is a short piece in French and English with plenty of drums, claps, stomps, and “la la la”s.

Victoria does a great job of bringing the ʻukulele seamlessly into mainstream music. Unlike many artists, Vox is not afraid to belt it out and because of that, I think Exact Change will probably have a wider appeal to all audiences then some instrumental albums.