“Four Strings: The Fire Within” by Brittni Paiva – Review 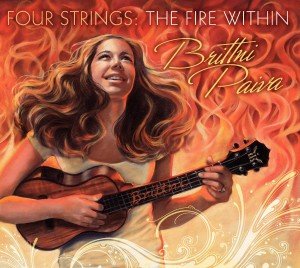 Brittni Paiva’s Four Strings: The Fire Within is a great sounding album.

She really brings her own “sound” to this new recording – it feels as though she’s arrived. Many of the songs have a Middle Eastern feel that Brittni has obviously been researching. She also includes a great cover of the Maroon 5 hit Sunday Morning.

The album jumps off to a quick start with Tamacun, one of my favorite tracks. It has a driving beat that I could see people dancing to.
Acelerou is another cut with a dance beat. Brittni trades licks with Spanish guitarist Johannes Linstead throughout Hour of the Lamps, the album’s most Eastern-sounding tune. Crusin’ on 7 was written during a motor swap on Brittni’s tricked out car. It’s not what I expected a song about going from stock to turbo-charged to sound like – relaxing! The last two songs are titled Fusion – East and West. Fusion: West has a catchy Jake-reminiscent power chord sound and a driving rhythm. In Fusion: East, Brittni coaxes a koto-like sound out her ‘ukulele that I would be curious to learn how to do.

All in all, The Fire Within is my favorite Paiva album to date. Brittni charts some new ground and it’s nice to see the creative boundary being moved in an ever expanding circle.