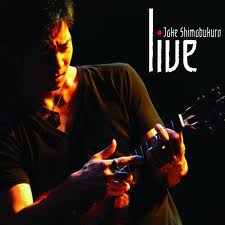 Jake Shimabukuro’s new Live album has just become my one of my favorites.

It is well known that Jake puts on a heck of a show,and that feeling was captured very well on this CD. The 17 songs presented on this album were recorded in different venues from Japan to New York by a very talented crew. The quality of sound that was coaxed from a Fishman Matrix pickup blew me away. You might think that for doing a live album Jake would have chosen to use a mic, but you can hear the nuances of the pickup in every song – well done!

It’s fun to listen to this album and hear the different reactions between the Japan and mainland audiences. In Japan everyone waits for at least five seconds to make sure the song is over and then “clap, clap, clap…”. On the mainland in cities like Chicago and New York he barely stops playing and the place goes crazy.

There are four new original songs on this album: Trapped, Piano-Forte, Five Dollars Unleaded, and Yeah.

While those new songs are exciting, this album has plenty to offer in the way of new arrangements to keep the old songs fresh.

In press releases it was said that this new version of Gently Weeps could be Jake’s best. While it was a lovely performance, I still think that the Youtube version holds the crown – that was a special place in time.

An interesting addition to this album were the “Talk Story” segments. There were only three “Talk Stories”, and at 12, 30, and 61 second lengths it wasn’t enough. Cool idea, but I want to hear more next time.

All in all this is a phenomenal album, Jake’s best yet. The ʻukulele virtuoso chose a great selection of his best live material. But the sound! Man, the sound quality is just awesome – the best part for me.