December 16, 2011 ~ Let me start off by saying, things have come a long way quickly in the ukulele building world. Five years ago when I bought my second ukulele the quality of instruments for their price was not even close to what it is now. This OU55CE is a good example of the ukuleles that have raised the bar.

Oscar Schmidt’s OU55CE is a baritone ukulele made of koa. MSRP is $509 but most online shops are selling it for under $300. But I got mine for free from Oscar Scmidt to try it out. 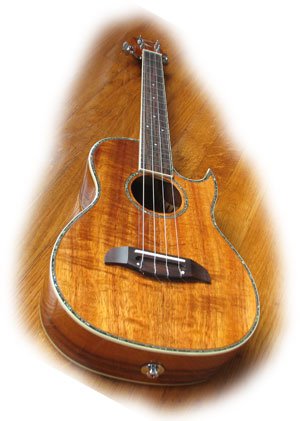 I played the ukulele with the stock Aquila strings tuned to DGBE and also with Worth strings (a CH-LGHD set). Since the Worth strings are so much thinner than the Aquila (they sat lower in the nut) and geared more for tenor ukuleles, they buzzed and were pretty floppy with the baritone tuning so I tuned them up to standard pitch – GCEA.

Made of laminated koa with a wide nyatoh neck, the OU55CE is solidly built in Indonesia. It features a rosewood fingerboard and bridge. Smooth turning Grover tuners keep the strings in check. The body is bound with abalone and a white material that also stretches up the sides of the fretboard. An active Belcat UK-2000 UST pickup provides amplification with volume, bass, and treble controls (the 9v battery that powers the preamp sits in the control box and pops out for easy changing).

The frets are level and rounded off cleanly. Running a hand up and down the neck will find no sharp edges until you reach the nut. Its sharp enough to make me wish for a bit of extra file work by Oscar Schmidt or myself if I were to keep the ukulele (read on…). 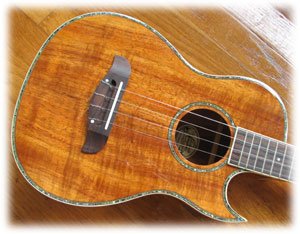 Some of the the “fancy” add-ons that Oscar Schmidt added to make the OU55CE look more attractive fell a bit short. The dots inlayed in the bridge are cockeyed and either stick out too much or not enough. It would have been better to just leave them out. And the headstock sticker that looks like inlayed abalone is well, a sticker. But it is concealed very well.

With the stock Aquila strings tuned DGBE there were some buzzes, mainly on open strings. I would attribute this to incorrectly sized nut slots – they are pretty wide and that lets the string sit lower. Of course the Worth strings buzzed even worse at DGBE, but that’s because they are a good deal smaller in diameter than the Aquilas – not Oscar Schmidt’s fault. However, tuning them up to GCEA reduced the buzzes almost completely and gave me the familiar ukulele pitches but with a huge baritone sound. A better setup tailored to the type of strings you use would most likely fix 95% of the buzzes.

Other then that the workmanship is great for an ukulele of this price.

The OU55CE is a very warm sounding ukulele. A factor owed to the size of the soundboard – big. Baritone ukuleles are already the best choice for playing slack-key style because you don’t have to transpose, but the warmth and round sound that they bring to the table makes it sound ten times more legit than on even a tenor size. I was digging the great tone and playing all my favorite Hawaiian style licks, with the wound bass strings at my disposal. The attack is a quick pop that lets the fat sound roll out behind it. The only qualm I have with the sound of the OU55CE is that it seems to be missing a bit of mid-frequency response compared to my other ukuleles. This is easy to over look though because regardless, it sounds good.

Plugged into a Roland AC-90 amp, I explored the tonal qualities of the UK-2000 pickup and was pleasantly surprised. The sound coming out of the amp was full and even. With a little bit of a cut on the bass slider, feedback could be avoided and you’d be ready to play a big venue. The pickup still has a bit of the typical “pluck” sound, but that comes with the territory of cheaper pickups. For the price it’s pretty good.

The action is probably of medium height. About what I’m used to, but because of the longer scale it feels a lot lower. Skinny frets make what you play seem very precise. Together the action and frets make playing easy, especially inside the 5th fret.

The OU55CE has a fairly wide neck that I found a bit awkward. It’s a nicely shaped neck that makes shifts a breeze, but it’s still wide. Sometimes when playing chords it seems that you are reaching for a chunky 6-string guitar chord instead of a 4-string ukulele chord. I guess it makes a little bit of sense because the frets are further apart, but other baritones have the same fret spacing and don’t have the wide neck to go along with.

I’m a fan of the OU55CE. It’s fun. It’s different. It sounds good and is easy to play. The bang for your buck is big. I was most excited about the potential this baritone has for slack key ukulele. Its sound seems tuned for the genre of Hawaiian music. For the price it’s a beast.