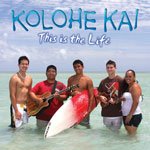 Kolohe Kai is one of those bands that is so catchy it’s annoying. Everything they release is hooky and an instant hit on Hawaiʻi’s radio stations.

This means lots of young uke players flock to their songs.

Cool Down is one of Kolohe Kai’s biggest hits (and one of their most catchy songs). I’ve been asked to teach it several times so I made up a chart.

Following a traditional Jawaiian chord progression, this song is only two chords. But they can be tricky if you’re not used to holding Bb or Cm. If these chords are still new to you, take this as an opportunity to work on changing between them.