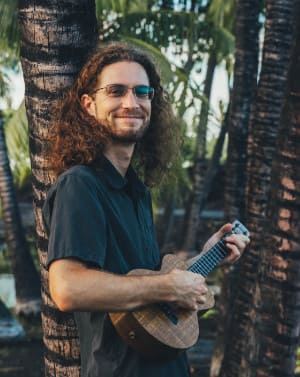 My passion is sharing musical knowledge in a way that allows ukulele players to improve through learning concepts.

Basically, I want to show you how to teach yourself.

Live ʻUkulele allows me to do this. Because of this platform, I’ve been connecting with cool uke people from across the globe since 2007.

An intermediate-level video course about diversifying your lead playing.
$24.99

Certain content here is more visited than others. Here’s what everybody else is looking for:

The Ukulele At A Glance

The ukulele comes in many forms with more emerging all the time. Its signature small look and happy sound have garnered it fans from all around the world and more join the ranks every day.

What is an Ukulele?

The ukulele is a small fretted instrument known for its bright, happy sound.

It originated in Hawaiʻi after Portuguese arrived in 1878 to work the sugar cane fields. They brought with them their traditional instruments, the braguinha and rajão. Elements from these instruments were eventually combined to create what we know today as the ukulele.

The tuning of the ukulele is similar to that of a guitar: GCEA, which is the same as the bottom four strings of a guitar, capoed on the 5th fret.

The uke’s traditional tuning moves the top string an octave above what you would expect. This means the tone goes from high to low to high instead of low to high like most other fretted instruments.

The re-entrant tuning lends itself to a compact, bright sound people associate with the instrument.

However, a low-G tuning is gaining popularity for its even, contemporary sound. This tuning mirrors the guitar and goes from low to high across the strings.

Ukuleles are almost always strung with plastic strings. These are usually nylon or variations on fluorocarbon fishing line.

Beware: Since they are built for light tensions, using steel strings can break your ukulele!

There are four main sizes of ukulele. From small to large they are: soprano/standard, concert, tenor, and baritone.

A soprano size ukulele is the old-school sound and look that most people expect. It’s almost always tuned with a high-g and has a tight, bright, “plucky” sound that’s great for traditional strumming.

Concert size is a nice Goldilocks fit for size and sound since it sits in the middle of the GCEA-tuned ukuleles. This is what I recommend to most beginners unless they are big boned, in which case a tenor might be more comfortable to play.

The tenor size is a contemporary favorite. Its long scale at GCEA pitch makes it very articulate and clear sounding which is great for fingerpicking arrangements. The tenor ukulele is a favorite among performing professionals.

The baritone size is the most obviously different because it typically uses a lower tuning of DGBE. Because of its large body, it has a deep, rich sound and large fret spacing. The tuning is also exactly the same as the bottom four strings of a guitar so it’s a common transition size for experimenting guitarists.

Which size you choose depends mainly on the sound and feel you want from your uke. A smaller size has a brighter sound and tighter fret spacing. A larger size has a more full tone and more room for your fingers.

If you’re not sure, I’ve yet to see a beginning student struggle because they started on a concert. It’s a great place to get your foot in the door.

The ukulele has had a sad history in mainstream culture. With it comes some misconceptions.

In Hawaiʻi, the uke is as ordinary as can be. Everybody plays a few chords. It’s on the radio all the time. There’s nothing exceptional about it at all – except for our world class players.

But in the mainland USA and elsewhere in the world it’s become recognized as a novelty. This is mainly due to the population’s limited exposure to the instrument coming from Tiny Tim, Elvis, and Hawaiʻi tourism.

It’s been portrayed in a cheap manner that most people have never taken seriously.

Of course it is! It’s as much of an instrument as the guitar, mandolin, banjo, or any number of other folk instruments.

People around the world are using it to play sophisticated music spanning jazz, rock, folk, R&B, reggae, blues, and, of course, Hawaiian genres (and beyond)!

While not yet widely accepted as a “traditional” instrument in institutions, Tobias Elof graduated university with a music degree using ukulele as his main instrument.

It has been featured in an orchestral setting by Jake Shimabukuro playing Byron Yasui’s Ukulele Concerto.

Due to the illusion of palm trees and hula dancers the uke invokes, our little four-string friend has an overly gushy positive stigma about it. The prevailing pop-culture consensus seems to state that “fun” and “happy” and “good vibes, bro” are the only feelings people have about the instrument.

It’s true that the tone of the instrument is inherently pleasing. There’s something heartwarming about the sound it creates.

But sad music that can be played on any other instrument can also be played on the ukulele. It’s up to the artist to portray these emotions in his or her music.

Compared to pedal steel guitar or saxophone, the ukulele is pretty straightforward, but “easy” doesn’t do it much justice. Like all instruments it has pros and cons.

Strumming the chords to a simple song on the uke is comparatively easy.

Playing a power chord rock progression is HARD! This is something that would be fairly simple on acoustic guitar, but arranging those low notes for an instrument that doesn’t even have those low notes? Hard.

Yes, I can usually teach a student to play a song on their uke in 15 minutes. But it’s their inherent feel for music that makes it sound good.

Just because the mechanics of the instrument are simple, music is still just as hard. And working within the limited framework of the uke’s small two to two and a half octave range creates many challenges of its own.

It’s a simple and straightforward instrument that appeals because of its low entry price (in money and also time spent learning). But despite that, I believe we’ve only scratched the surface of the possibilities the instrument has to offer.