A Short History of the Ukulele: From Nunes to Kanile’a

Portuguese immigrants began coming to Hawai’i in 1878 to work the sugar cane fields. The first crew that arrived on the Ravenscrag brought with them two traditional Portuguese instruments: the braguinha and rajão. Manuel Nunes and some of his buddies (Augusto Dias and Jose do Espirito Santo), immigrants and instrument/cabinet builders, combined elements from the two instruments to create the machete, which would eventually become known as the taro patch fiddle – or ukulele.

Another theory about the origin of the name is that when the Portuguese began playing their machetes, their fingers looked like jumping fleas when they played.

Nunes began the first ukulele company with his two sons around 1910. He called it M. Nunes & Sons. (Us Portuguese guys are pretty clever!) 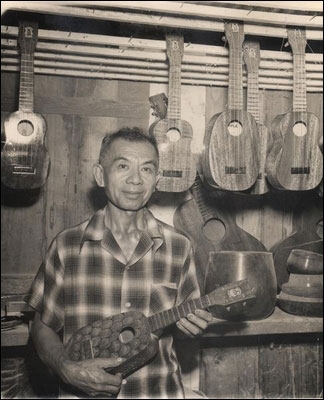 The ukulele’s popularity grew. Many people on the mainland had caught the bug, and the demand for ukuleles was greater than Nunes could supply.

In the early 1910s Samuel Kaiali’ili’i Kamaka began building ukuleles as an apprentice to Manuel Nunes. In 1916 he started his own ukulele building business. His workshop was in his basement, where he would turn out a dozen ‘ukuleles a week and sell them for $5 a piece. In 1921 he moved to a bigger workshop where he created the first pineapple ukulele.

Kamaka continued making his fine instruments and introduced his two sons Samuel Jr. and Frederick to the art while they were still in elementary school. In 1952 Samuel Sr. became ill, going into semi-retirement. He died a year later. Sam Jr. and Frederick then took over the business and five years later moved to Kamaka Hawaii‘s current location. Now into their 80s Sam Jr. and Fred have passed the company on to their sons who are still making fine Kamaka ukuleles.

Along with Kamaka, other companies like Martin, Gibson, and National also jumped on board the ukulele-making bandwagon in the early part of the century.

In the 40s, 50s, and 60s the demand for ukuleles started to slow down. When the 70s came around, Kamaka was the only company still manufacturing ukuleles.

Now into the 21st century, the ukulele is making a comeback. People are really starting to see the potential that the instrument has, lots of thanks to Jake Shimabukuro’s Gently Weeps Youtube video. Along with the new interest came new manufacturers: Kala, Lanikai, Kanile’a, Mya-Moe, and Koaloha, just to name a few.

Ukulele Magazine published a great article on the birth of the ukulele that’s a bit more in depth than mine.

But nothing else comes close to the detailed information presented in Jim Tranquada and John King’s book, The Ukulele: A History. If you want to know more about the ukulele’s past that is your resource.