How to Count and Keep Time on Ukulele 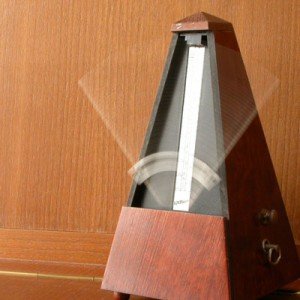 My regular readers and students know that I’m always talking about timing. If a song doesn’t have a consistent beat, there is no groove. No groove means nobody can tap their foot.

Have you ever been totally into a song on the stereo when the CD skipped? For the instant before you register what happened it feels like the end of the world. Imagine when that groove isn’t even there to begin with… That’s why you work on timing.

Almost every song has a pulse. A steady, driving force that exists whether you hear it or not (whether or not it is played) and pushes the song along in time. This timing force is called the beat.

The beat is the most basic rhythmic aspect of a song. It repeats at consistent intervals over and over. Wherever you tap your foot or clap your hands in a song is where the beat usually lives.

A beat happens independently of everything else in the song. Sometimes, notes, chords, hits, words, or flying pigs land on the beat (at the same time as the beat). Sometimes they don’t. The beat continues no matter what.

You can think of it as an imaginary instrument that never falters. Your job, as a musician, is to fit the notes you are playing into the beats at the right places. Here some examples:

The first is a plain “click track” – or just a recording of pure beats. The click is on the beat:
Here is the same click with “Twinkle, Twinkle, Little Star” played over the top of it – on the beats:
And here again the click is doing the same thing, but this time the notes are offset so they play on the upbeat. Hear how now the notes are between clicks instead of on top of them? Compare this and the above track. (The first one is the correct timing.)
This is a real-world example from my song Aerial (off of Point A) with the metronome cranked way up. It’s a different tempo and sound than the other examples, but hopefully you can hear how all the instruments are playing something different, while staying with the beat even if they aren’t necessarily on it.

The keeper of the beat is a metronome. It plays a steady click on the beat. It never strays. As long as you have it turned on it will go forever. It doesn’t care if dinner is ready, if the phone rings, or if meteor conks you in the head. It is your best friend and harshest critic. Get one.

I highly recommend the Pro Metronome app for iOS devices. It’s free and does much more than most of us will ever need.

Or, if you are practicing near a computer you can use the simple metronome at Metronome Online.

A “beat” can also refer to a drum beat. As in, “Dude, that’s a fat beat!” That kind of beat is a repeating pattern the drummer plays. It’s different than the “keeping time” beat, but always follows it somehow.

Music repeats a lot. Most of all when it comes to keeping the beat. Since it’s so repetitive, actually counting the beats can be pretty boring. That’s not to say it isn’t important! Knowing where you are at in the beat is the difference between confidence and guessing.

When you count a song you give number names to each beat. This helps you know what beat certain notes, chords, or words fall on or around. The number pattern repeats depending on what time signature you are in. For now we’ll just talk about the 4/4 time signature (more on that below) that everyone is so used to hearing. In 4/4 you count in fours: 1… 2… 3… 4… 1… 2… 3… 4… on and on until you reach the end of the song. Those aren’t random numbers. They each have a specific home in a measure.

A measure is a way of dividing music up into small bite-sized pieces. It’s also referred to as a “bar” of music. Each measure (depending, again, on the time signature) is home to four beats. The same four that you use to count. 1… 2… 3… 4… Each bar is divided by a vertical line. Here’s what a few bars look like with a steady four-note metronome click:

The X-ed-out note just means that it has no pitch (like a drum or banging on your desk) and the stem tells you it is a quarter note (1/4 of a measure).

Try listening to or playing a song you know well and begin counting where you feel the beat. It takes practice to be able to continue playing and put your mind on autopilot to count. Say it out loud. Otherwise you run the risk of getting trapped in the ego of the mind that compensates for poor timing.

Another thing to get into the habit of doing is tapping your foot. Revisit all of your old songs and practice them until you can tap your foot on the beat the whole way through. If you can’t after some practice, keep practicing. It’s really important.

The amount of time it takes to get from one beat to the next is the tempo of the song – how fast or slow it goes. Tempo is counted in beats per minute. The more beats, the faster it goes and vice-versa. For some reference: 40 BPM (beats per minute) is really slow, 120 BPM is kind of the middle ground and 200 BPM is really fast. All colors of the tempo rainbow live between and beyond. You’d be surprised how much difference in the feel of song a couple BPM makes.

BPM is seldom shown in tab, but if you use tab/notation combos or just plain notation you’ve probably seen something like this:

The note tells you that one beat = a quarter note (1/4 measure). The number is how many BPM that note equals. If you were to use an eighth note there, for instance, to match the same tempo the number would be double: 240 BPM.

Play around with different tempos on your metronome. They are all useful and you should at least get an idea what many of them sound like.

Rushing: How to Avoid Increasing the Tempo

Ukulele players tend to rush. This drives me crazy.

If you’re playing by yourself it’s usually less of a problem. You can simplly begin practicing with a metronome and critiquing yourself.

But oftentimes in a group setting, one person who rushes pushes the person next to them faster and it becomes a feedback loop. Before you know it it’s a race to the finish.

This is incredibly frustrating for members of a jam group who have better timing or are more advanced. It’s enough of a detriment to the experience that they might not want to participate any longer.

In a democratic jam group, timing management comes down to ego management. Which is to say, people get offended if you tell them their timing sucks.

For some reason most players are really attached to what they think is good timing (i.e. their timing). You can offer constructive criticism for any other part of their playing and it’s usually seen as a learning experience. Not so for timing.

So how do you gently encourage people in a group to rein in their rushing tendency?

Ideas for Curbing the Rush

Be honest, but use pronouns like “we” and “our” to avoid blame. This is best done by the esteemed and well loved group leader.

Let your players know that there is a problem and some options for fixing it. Encourage everybody to pay attention to their timing and explain the benefits of holding to a steady tempo (it portrays a stronger feel, a higher level of musicianship, and is easier to play).

I feel like group rushing is usually spurred on by the sheet-music-induced “me” bubble. If you can get people playing music instead of interpreting ink on a page with their eyes, they will inevitably listen and their timing will improve.

Wrangle yourself a patient and competent (very, very important!) bass player who can be the timing police without anybody knowing it. Turn him or her up louder than they should be and people will instinctively follow.

Bass is felt by the listener. It’s easier to impart time via a strong feel so it makes sense that the bass player controls the timing.

This is either a good thing or a bad thing, depending on the player.

(The problem with bass players is that everybody thinks they can play bass. If the bass player rushes, even the best uke player will be forced to follow. So a bad bass player will just make timing problems much worse.)

Implement a 10 minute warmup session at the beginning of the jam where you play easy picking exercises with a metronome.

The metronome is simply to keep people on the same note while picking. Everyone will be forced to stay in time and no one is the wiser.

Play songs with a click. This one is the hardest to implement because people don’t inherently know how to play with a metronome.

If you have novice players who haven’t studied with a metronome on their own, it will be very hard to stay on track without an amplified lead. This can lead to very loud playing situations that might not be fun depending on the size of the group.

If you have a more experienced bunch of ukulele players who just need a little reminder, you could try implementing a blinking metronome.

This is the biggest example of that I’ve yet to see:

Time signatures are yet another part of the puzzle. We’ve talked about beats and tempo, but how do you know how many beats goes into each bar before you start at 1 again? That’s what a time signature tells you.

When you look at sheet music, the time signature is located at the beginning of the song – right after the clef (treble clef for ukulele) and key signature. Additional time changes will be shown just inside the beginning of a measure:

Examples of songs in 4/4. (There are so many it’s kind of funny. Here are just a handful off the top of my head.):

The 3/4 signature is considered “waltz time”. If you listen to a waltz song or some other piece using 3/4, you will notice that instead of four beats per bar, there are only three (1… 2… 3…). Because of the odd number of beats 3/4 often uses a rhythmic feel of low, high, high – “low” being the 1st beat.

Examples of songs in 3/4 time:

Now we’re getting really weird, but this deserves to be included. 7/4 is a cool recycling sound because you expect an eighth beat, but instead you get the 1! This is a popular time signature for metal bands since it’s sufficiently “weird” and has an unsteady feel.

Add an extra beat to 4/4 and you get a super challenging time signature called 5/4.

The main trick to counting an odd time signature is to find the feel. Once you know how it “feels” you can forget about counting it explicitly. One way to make this easier is to find a smaller sub-count you can create that follows the pulse of the song. For example, to count 7/8 you could use 3+4, 4+3, 2+2+3, etc… Another method is to find where the measure starts and compare it to what you’re normally used to in terms of recycling to 1 earlier or later. For instance, I don’t need to count 7/8 anymore because I’ve learned to feel it as recycling one beat earlier than normal.