Ukulele Picks – A Guide to Plectrums

Who uses picks on the ukulele?

The answer is: lots of people! They are great for getting different tones and for backup in case you break a nail.

In my opinion, the best kind of picks you can use are your fingernails. They are always with you and if you take care of them, they sound good. As your nails grow, just start playing and they will become part of your gear.

These are cool because they let you position your hand in a more relaxed manner where you can keep you wrist straighter. A thumbpick also will give you pretty much the fattest tone you can get from an ukulele.

There are tons of different kinds of thumbpicks, so just go to the music store or online and choose a couple that you like the look of. For less than $1 a piece, you can get a couple to see what fits your style best. I personally like the Golden Gate GP-7s or National Large Thumbpicks, but fit is very personal.

A unique hybrid of a flatpick and a thumbpick is the Herco style pick. It’s basically a flatpick with a loop that holds it on your finger. Better for strumming than a thumbpick, but much easier to hold onto than a flatpick!

When you first start playing with a thumb pick you might feel like you are going to break the strings off your ukulele. Don’t worry, you just need to practice letting the pick slide off of the strings at a little bit of an angle.

Fingerpicks slip over the tip of your finger to create a solid surface to pluck with. You can really only use most fingerpicks with an upwards picking motion. This can be limiting, but the sound you achieve is so strong it might be a worthwhile sacrifice for you.

Some fingerpicks are made out of metal and you can bend them to fit your finger. Others are made of plastic. Metal sounds brighter. Plastic is more natural – like a fingernail. Try a few of each to see what you like. 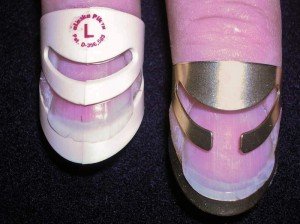 A different kind of fingerpick is an “Alaska Pik“. It goes over your finger, but under your nail. These are cool because you can pick down as well as up.

Normal guitar picks are not used by many ukulele players except guitarists who have just transferred over to ukulele. There are several types: standard guitar picks, felt picks, and rubber picks.

Standard flatpicks have a great, snappy sound and a fast articulation that allows you to play certain things faster than normal.

They come in different thickness gauges. A thin pick is easier to strum with, but has a “clack” sound every time it hits a string. A thick pick is harder to push through the strings, but has a fatter tone that lends itself to picking single notes.

Felt picks follow the same idea as plastic picks, but are made out of thick, stiff pieces of felt. I can’t say I’ve ever used one, but some people like them for strumming.

The last flat pick style is the rubber pick. These are kind of fun because they act slower and sound softer than other picks. They could be charming for certain types of playing. However, they wear out the fastest of any pick I’ve tried.

It’s pretty easy to make your own flatpicks out of various materials. Old credit cards or wood scraps can be shaped to do the trick. Or there is the old Brian May standard of using a coin. Experiment. Some materials and shapes make some interesting sounds!

Always bring a pick to a jam. When soloing, having a pick is the difference between being heard and looking like you’re playing air-ukulele.