Effect pedals come in MANY varieties. From little stomp boxes to rack mounted studio effects, from making your sound beautiful to making your sound gross, subtracting from it, changing it entirely, effects can do most anything you can imagine.

Since the subject is so broad, I’ll spend my words here on some of the most useful and traditional effects you might use for ukulele.

Reverb creates a sense of natural space. It’s an organic sound we’re used to hearing and interpreting unconsciously to get a sense of the size of a room, canyon, street, etc…

You can hear the natural reverb of many environments in this song, recorded live in each place.

By putting reverb on the sound of an ukulele, you can create a false sense of space. This often makes the sound more evocative and beautiful.

A reverb pedal often has controls that work like this:

There are several reverb sounds like: spring, plate, room, hall that are often available as different modes in a pedal. I think plate and hall characteristics usually sound best with the ukulele.

I currently use the reverb models in my HX Stomp, but in the past I’ve had the TC Electronic Hall of Fame, which is quite good. 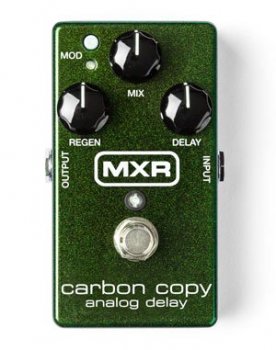 A delay effect is pretty self-explanatory: it delays a copy of the sound. This creates a more obvious (less natural), but less dense sense of space than reverb.

Delay is usually best applied to melodies. Strumming with a bunch of delay on your sound can sound kind of goofy, but as always, it depends on the situation.

Some pedals have the ability to self-oscillate which means the feedback can turn back on itself and get louder and louder. This can break ears and equipment if you’re not paying attention. I’ve seen pros scare themselves onstage with this side effect before.

Just like reverb, there are a few different delay styles. These are mainly created by the technology used to achieve the effect – or modeled after the sound.

Digital delay has a bright, clean repeat. The Boss DD-3 is a classic for Hawaiian musicians.

Analog delay gets “muddy” and grainy as it fades out. This dark sound sits back in the mix. I had the MXR Carbon Copy for years and loved it.

Tape delay was created using a loop of tape run through a “write” head and then a movable “read” head that played back the delayed notes. This is mainly a modeled sound in this day and age since tape technology is old, huge, and unreliable. The Strymon El Capistan is a modern classic tape modeler.

Reverse delay sucks the note from end to beginning creating a swell effect.

Shorter delay times create a slap-back sound, longer ones create more of an ethereal echo. I really dig around 325 miliseconds of analog delay with 3 or 4 repeats for what I do.

Of all effects, ukulele players are probably most used to hearing natural chorus at their jam group. A chorus pedal recreates this sound by delaying the signal by a few milliseconds and de-tuning and modulating the delayed track a little bit.

It can be nice for thickening up the sound, but probably borders on not-so-useful in a performance setting. That said, true stereo chorus from an amp like the discontinued Roland AC-90 is a beautiful thing to behold.

Compression clamps down on signal spikes and brings up the volume of everything else (like this).

Tremolo fluctuates the volume creating a choppy sound (like this).

Flanger is similar to chorus, but with a shorter delay time and has a more aggressive sucking sound (like this).

Phaser is the sister to flange except it is a frequency-based effect instead of delay-based (like this).

Filters are fancy EQs that move automatically like an auto-wah Q-Tron or with a foot rocker pedal like a Crybaby wah-wah rocker pedal.

Nobody ever died from not having effects. They are a luxury. But a preamp can be a make it or break it piece of gear.

You can approach pairing a preamp and effects a couple different ways.

The most popular type of effect housing, a stompbox is a small unit with a footswitch that usually focuses on creating only one type of sound. You might pair a reverb pedal with your preamp and put them together on a board for ease of transportation.

More pedals obviously take up more space. It’s easy to want to have every sound available to you, but to do so you have to lug a huge case of pedals around.

Over time I’ve realized that all I really use are a preamp/EQ, tuner, reverb, and delay. Here are my picks for a simple, compact ukulele pedalboard: 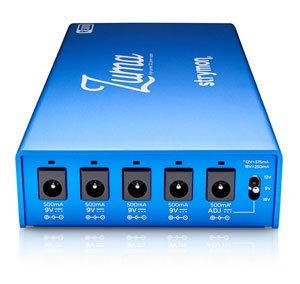 Having several pedals on a board is one thing, getting power to them in a compact and adequate way is another. The last thing you want is a wall-wart plug for each pedal. This takes up a huge amount of space – in addition to being a rats nest – and creates all kinds of opportunities for humming, hissing, and other noise in your signal.

I’ve used the Strymon Zuma R300 power supply in the past with great success. It fit neatly under my pedalboard and provided plenty of clean power to up to five pedals.

A multi-effect uses a streamlined interface to create several effect sounds in one compact housing. Oftentimes, the smaller these units are, the more programing they require to create sounds.

This makes it hard to make changes on the fly. But if you always use the same sounds, the space and simplicity it provides to your setup are probably worth it once you figure out how to program the unit.

Not all multi-effects are suitable for preamp duties.

Big Multi-Effect – Boss ME series. These pedals can be programed to recall sound patches, but also function as what-you-see-is-what-you-get collection of single effects all in one box. Acts as preamp: No.

Compact Multi-Effect – Line 6 HX Stomp. Expensive, but amazing quality and attention to detail in a small box. It includes an input-loading feature to match impedance and effect options for days and days, plus occasional firmware updates that add features. Acts as preamp: Maybe.

Pluging Your Ukulele Into a Preamp or Pedals:

Making the connections between your ukulele, pedals, and amp is not hard, but if you do it wrong you won’t get any sound.

Cables all basically do the same thing. The sound difference between a great cable and a bad cable is certainly audible, but won’t be obvious to undiscerning ears.

That said, the quality of the cable will hugely affect how long it lasts. I’ve had bad luck with cheap Fender cables crackling after a few years. This is just one more headache that isn’t necessary.

So now I spend decent money on cables and haven’t had a single one go bad yet. My choice is Mogami Gold. I’ve had my first one since 2013 and still gig with it almost every week. When it does give up the ghost I’ll be trying out the Mogami lifetime warranty.

If you want to plug your ukulele into a preamp THEN an effect:

For each additional pedal, just add a cable and the effect.

Make sure your amp is off, then turn on the pedal. Doing this in the reverse order can cause your amp to hear the “pop” of the effect turning on.

Turn your ukulele volume to 3/4. Then slowly strum and bring the volume of the amp up to the desired level.

If you have several pedals, lining them up in the correct (or incorrect) order can change your sound.

Here’s an guideline for making everything play nice, though it’s not a hard and fast rule:

Conclusion and the GAS disclaimer

Pedals can really help make your ukulele sound better plugged in. Start with a preamp, then a reverb, then a delay if you’re inclined. Everything else tends to being more like toys than tools.

GAS is known as gear acquisition syndrome. It’s a silly tag people give themselves when they spend lots of money of gear. Remember that pedals, ukes, strings, etc… will NOT make you a better player. Practice does that. Gear simply provides a tool to make it heard.

So keep it simple and honestly assess what you need.