How to Create an Impulse Response for Ukulele or Guitar

Plugging in a piezo pickup has always been a compromise. But the situation is getting better!

Good as a piezo might be, there’s always a trade off in sound. In a head-to-head contest, a microphone will always sound better. The pickup element just can’t reproduce the same frequencies in a musical way.

With a technology called impulse responses (IRs for short), you can now create an EQ curve that mimics the frequency response of, well, ANYTHING!

The most obvious use of this in our context would be to EQ a piezo to make your ukulele sound like it’s playing through a microphone.

What the Heck is an IR?

In layman’s terms, an impulse response is a snapshot of an EQ curve that you store in a little audio file. It allows you to capture the sound of specific things – instruments, rooms, amps, etc… When you apply this EQ curve to another sound, you’re creating the illusion that you’re playing the IR instrument, room or amp.

The IR can be as detailed as your equipment will provide, allowing you to get incredibly accurate renderings of the source material. Even the fanciest parametric EQ can’t match the detail of an IR.

Using some fancy software you’d analyze the discrepancies between the two audio files and export the difference in EQ as an impulse response. This could be then loaded into an IR-reading device and used to create the sound of an elephant in a room anywhere, even if you don’t have an elephant handy at your studio.

Products like the Fishman Aura series and others have leveraged impulse response technology for a while now to create better live guitar sounds. Unfortunately, this has excluded players of more obscure instruments since the presets are made by Fishman for Fishman products. If there isn’t a market for it, you don’t get an IR.

Times are changing, of course, but if you don’t want to wait, you can do it yourself.

With the advent of the Audio Sprockets ToneDexter, IR technology came back onto my radar. It also made the technology the most accessible its been to the average Joe.

The Tonedexter does the hard part of creating an impulse response for you. You simply plug in your favorite mic alongside your instrument pickup and the pedal creates an IR of the difference. That way when you play with just your pickup, it’s altered to sound like the microphone. Very cool, but expensive for this one purpose.

LR Baggs has since launched their Voiceprint DI, which allows you to create IRs with your phone.

Recently I upgraded my hodge-podge pedalboard to the new Line 6 HX Stomp. It’s compact and has all the effect options I could ever need.

The HX Stomp also allows you to stick IRs in your signal chain!

I knew this was valuable to creating a better live ukulele sound, but it took me a while to figure out how to implement it. After several waves of research, I figured it out. And it’s not as hard as it seems once you know what you need and how to do it.

Before I go any further, let me convince you why this is worth exploring.


I couldn’t believe my ears when I first loaded these up. They’re a little flat recorded into the computer, but the potential for sound polishing is huge! This was only my first try too!

This is with the IR mixed at about 60%. 100% is too bright, but combining the two signals gives you the best of both worlds.

Now that you want to play with these too, let me show you have it’s done.

The following applies to any instrument you want to make an IR for. When doing my research, there seemed to be a lack of easy solutions in general so perhaps this will be useful for a guitarist, keyboardist, or banjo player down the road.

How to Make an IR

I’m sure there are many ways to do this, but MFreeformEqualizer worked fine for me and was way easier than I was expecting. If you’re going down the IR rabbit hole you’ll be shelling out some bucks regardless, so for me, $45 felt like a deal.

There’s a demo version available that might work fine for creating IRs. I haven’t tried it.

The whole idea of creating an impulse response like this for ukulele is to make up the difference between miked and plugged in sounds. To do this you need to have a start and end reference recordings.

You could, theoretically, use someone else’s ukulele recording and match it to your plugged in sound, but for me the whole idea is to get my great-sounding ukulele sounding like itself through a PA, not to copy someone else’s sound.

At first, I didn’t even create new recordings for my IRs. I just used some of the rhythm ukulele parts from my album, If Only.

More recently I sat down to make some fresh, IR-specific recordings in which I played across the entirety of the instrument. These additional tones seemed to capture a more detailed – and better – IR.

For your playing material, try strumming some open chords, some closed voicings up the neck, along with some fingerpicking and single-note playing. This cross-section will give you the full spectrum of your instrument.

The bottom line is that you should have a simultaneous two track recording of your instrument using a mic AND the pickup. (Each mic and mic placement sounds different and will create unique IR responses.)

If you’re not sure about recording your ukulele, follow the link and do your homework. This is a project that builds upon recording and DAW skills and should probably not be your first try at tracking your ukulele.

This next bit is the fun part.

MFreeformEqualizer has two options for capturing the source EQ curve: sidechain and audio file. I don’t have sidechain capabilities in Cubase so I was grateful for the audio file option.

Using the sidechain allows you to work without ever leaving your DAW. It’s not crazy hard, but you’ve got to figure it out. Here’s some sidechain reading on Sound On Sound.

To go the audio file route, bounce a soloed render of your microphone track out of your DAW. Then load MFreeformEqualizer onto the pickup track. This is where we’re going to superimpose the miked uke IR.

In the MFreeformEqualizer look for the “AUTOMATIC EQ” section at the bottom of the window. Click the arrow/window button to expand it, if needed.

Now click the drop down on the right side of the red “ANALYSE source” button: 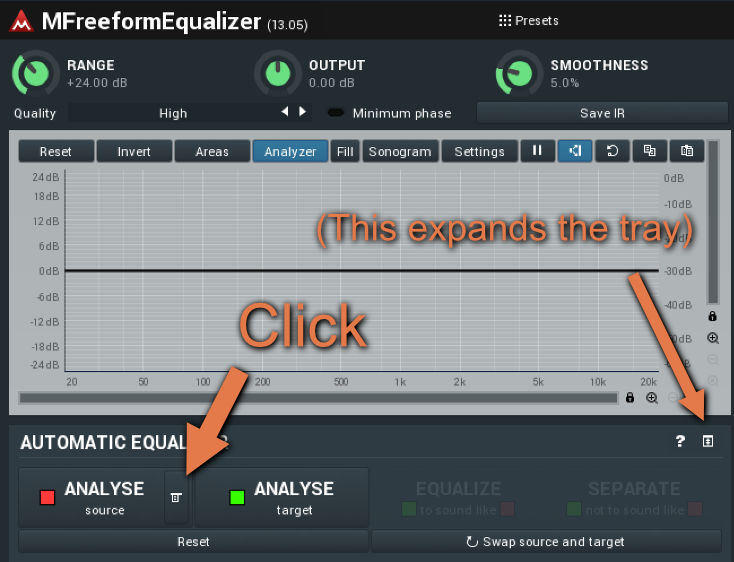 Now choose the microphone render you just exported (hopefully you put it somewhere easy to remember!). 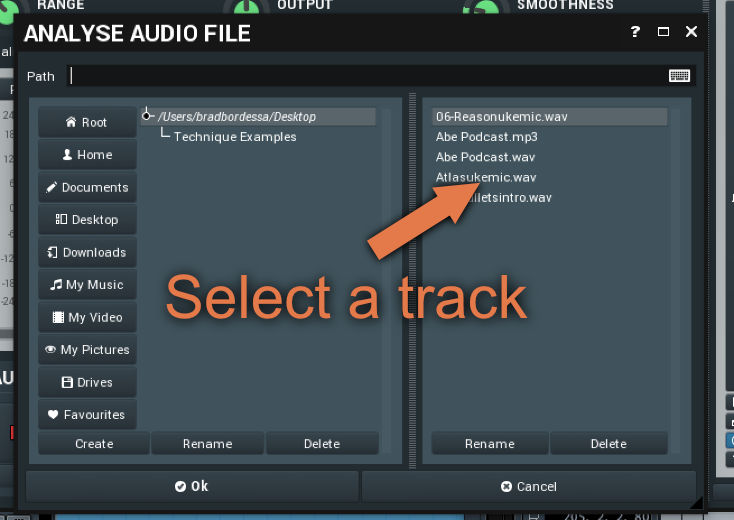 MFreeformEqualizer will quickly analyze the track and create and EQ curve for it. Like so: 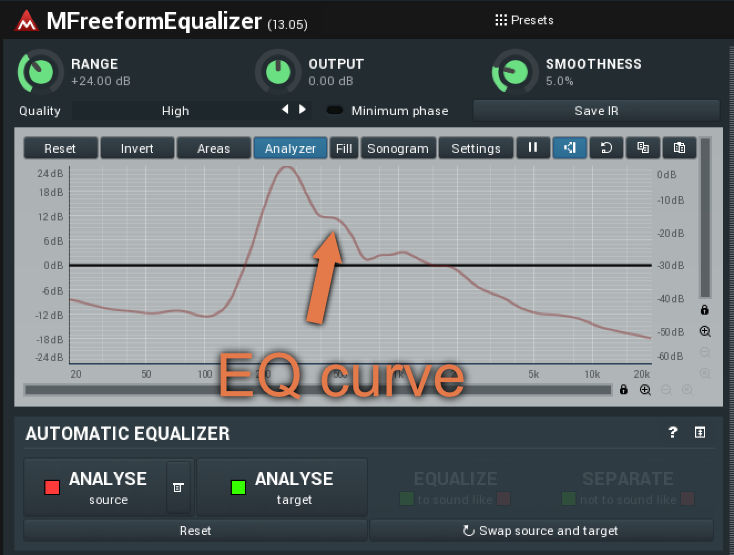 To get the most detailed IR possible, you can pull the smoothness knob down to 0. This creates more points along the EQ curve and will look more saw-toothy.

In testing several smoothness settings, it seems like the lower the smoothness, the brighter the sound. Just adding a couple percentage points (1-2%) mellows out the highs and brings some mid mud into the mix. 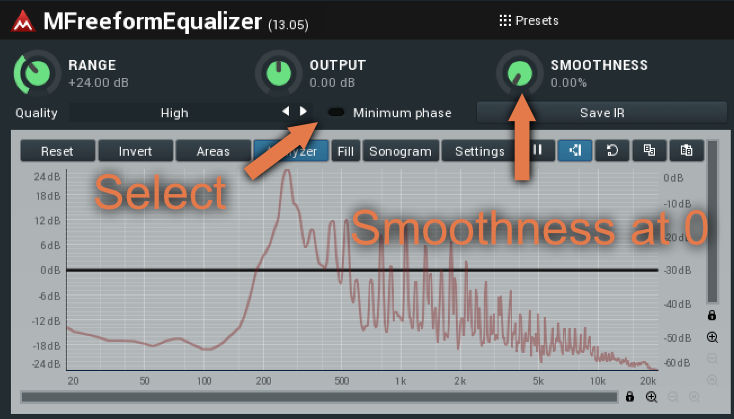 In the tutorial I watched, the guy recommended clicking the “minimum phase” option. This seems crucial for using IRs in HX Stomp because ones I tried without minimum phase checked didn’t output any sound.

Now we’re going to overlap the EQ of the two tracks. Press the green “ANALYSE target” button and press play in your DAW. (Remember the EQ plugin should be loaded on the DI pickup track!) 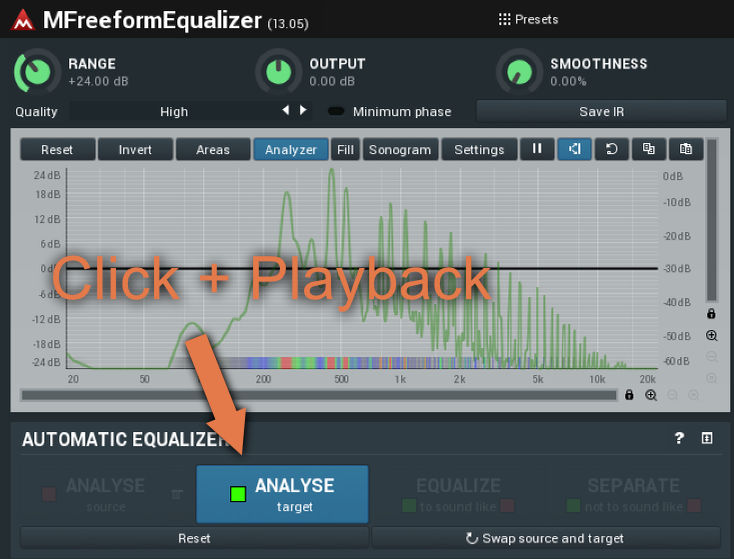 The plugin will analyze the playback of the track and create a new EQ curve that will hop around for a bit. Let it play until the curve settles down and stops moving as much. Then pause the playback.

Click the “ANALYSE target” button again to finish. Now you’ll see both EQ curves. The microphone track is in red, the pickup track is in green. You should see some discrepancies. If not, you might have your tracks mixed up and you just analyzed two versions of the same track. 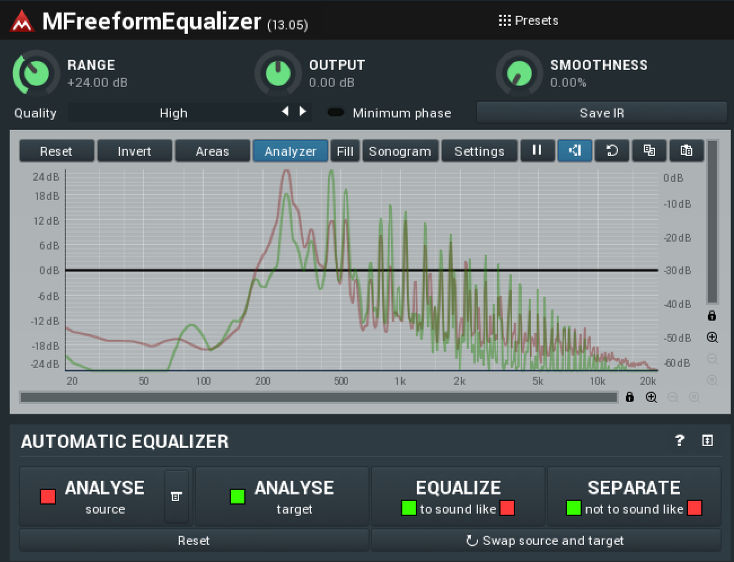 To see the discrepancy between the two tracks, just press the “EQUALIZE” green/red button. (I imagine you can reverse your track inputs and click the “SEPARATE” button here.)

These are the EQ changes MFreeformEqualizer will make to the pickup track to make it act like the microphone. At this point you can play back the pickup track (be sure to solo it) and hear what the IR will basically sound like on your plugged-in sound. 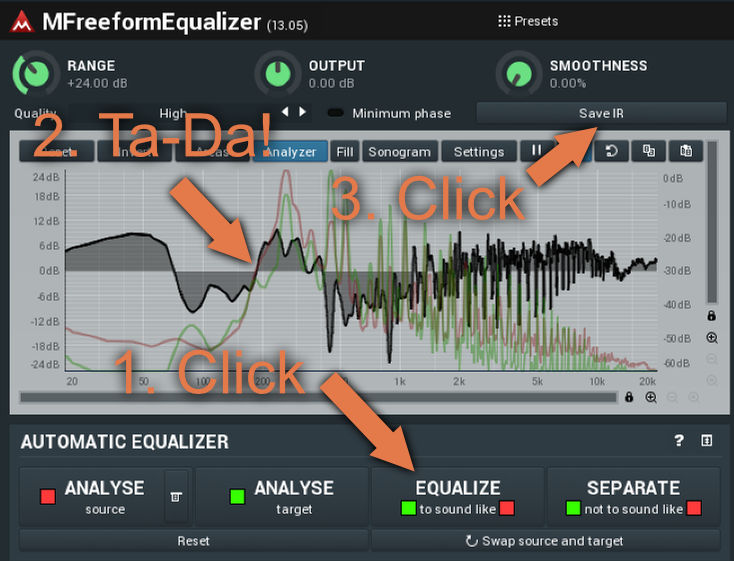 The last step is to click “Save IR” above the EQ window. Locate a folder and name your IR and you’re set! 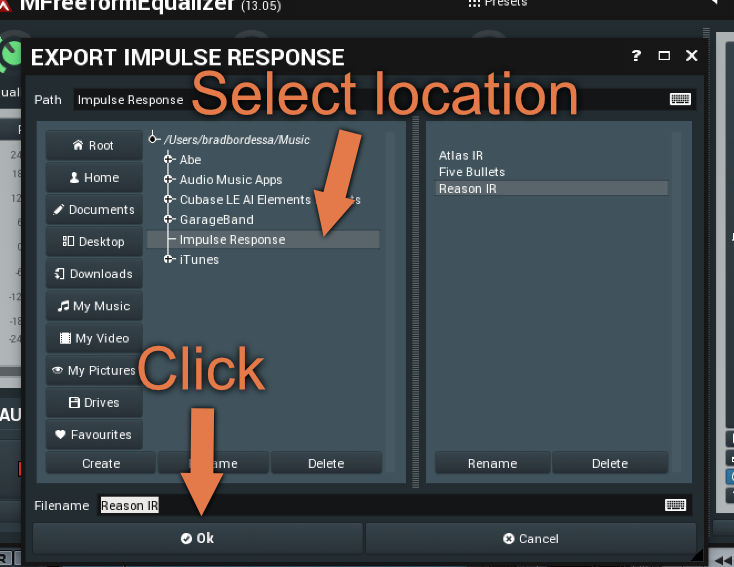 The IR saves as a .wav file that seems to be optimized for most applications. From here you’re on your own to figure out how to get the IR onto your device. It was really easy with the HX Stomp.

In addition to the very straight-ahead Neumann KM184 mic IR I made, I also took some content from other source tracks.

One was another mic sound that I liked from my album. This particular take didn’t have a DI track as well so I rendered it against the plugged-in track from the first IR. Surprisingly, this one doesn’t sound very good.

Here it is with the IR at 100%. There are some serious phase issues going on:

Another I did was of a fuzz electric guitar sound from a song I dig. The trick to using already recorded songs is finding a snippet where the guitar (or other instrument) is playing by itself. Not everything will give you a clean look at an EQ curve, but this track happened to have just guitar in the intro.

This turned out to be a pretty radical EQ curve, but I thought it was a huge upgrade from the normal fizzy distortion tones you usually get with a piezo equipped uke. It sounded more guitar-like and alive. Like you’d expect a steel-string uke to sound.

If you just don’t have the capability to make an IR, but still want to try the technology, here are some options.

3 Sigma Audio is a well-known IR creator. Their acoustic guitar IRs get rave reviews and they just published some uke ones. For $10 each, it’s a lot cheaper than a microphone.

I honestly don’t know if I’m doing all my processing right, but the results I’ve gotten are very exciting. Here are some of the best IRs I’ve made from my ukes. A lot of them are repeat setups, but yield very different results.