I’ll be the first to admit that I’ve never been a very hip, pop-culture person. Ever since I was a kid I’ve always been years behind the times when it comes to owning the newest and coolest technology.

In 2013 when I first wrote this article, I had just gotten an iPad and felt, for a brief moment, like I was up to speed. Unfortunately, that iPad recently died (RIP), but the discoveries I made with it still stick with me in helpful ways on other devices.

The Apple iPad and iPod Touch/iPhone are incredible tools that I find I use more than I first thought I might. Beyond being able to handle everyday email and calendar stuff from bed, their functionality is pretty much unlimited with 3rd party apps.

I don’t love the proprietary Apple model of controlling how you use your devices through requiring updates for compatibility or discontinuing certain features (headphone jack?).

Now that there is some great competition on the market, you might want to take a look into other devices. Any app developer worth their salt is coding for both Apple and Android. 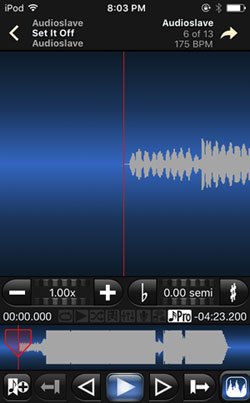 Learning a song and finding a key that suits your voice (or ʻukulele) is usually a two-step process, but with Anytune it’s easy to dial a recording up in any key and hack your way through it.

You can transpose any song in your music library up or down in half-steps as much as an octave in either direction. That’s fantastic, but you can also slow down or speed up the tune to figure out tricky parts! This is incredibly useful when hopping from standard to baritone tuning and trying to find that sweet spot for your vocal range that’s in a useful key.

Anytune also has a huge host of features that I haven’t figured out ranging from EQ to cue and repeat features to track gain and pan.

This is hands-down my favorite app. 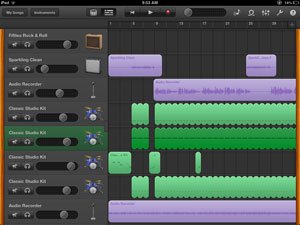 Obviously the long-establish heavy hitter in this roundup, GarageBand for the iPad is similar to what you would find on any Mac. The only difference is the simplified layout and lack of certain features.

With iOS GB you can only record one track at a time with either the plain audio recorder or the guitar amp models. You are limited to a max of 8 simultaneous tracks and any space you need beyond that has to be achieved by merging two or more tracks together.

Editing is limited in the iOS version of GarageBand – all you can do is control volume and pan, along with delay and reverb levels. The lack of an EQ section is the biggest drawback I’ve found since most low-budget recording doesn’t provide the best sound source. You can, however, export the files to OSX GarageBand and do further editing there.

What iOS GB does best is integrate the software instruments and programming abilities of GarageBand with the touch screen interface. Say goodbye to “musical typing.” Now you can just play the virtual keyboard, drums, bass, and guitar to record your parts.

The Appogee JAM is the simple interface I’ve been using to get a 1/4″ signal into the iPad. Clean sound, simple to use. 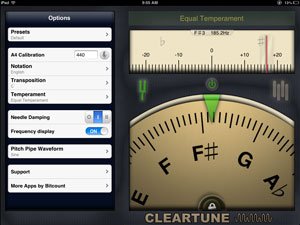 Cleartune is as simple or complex a tuner as you need.

It’s accurate and has a big, giant display that would make it great for setting on the floor during a show. Cleartune has the ability to sense pitches from the built in iPad mic or to use an input signal from the headphone jack.

The many options on Cleartune allow you to use special tuning presets to alter notes by a few cents. This can be used to consistently find “sweetend” tunings. To speak for the accuracy, I recently used Cleartune to set intonation on my Kamoa electric ʻukulele. It was a breeze. I’ve never been able to see how clearly where the pitch of a string was before.

There are other free options these days that will do just as good of a job tuning your ʻukulele if you don’t need advanced features.

I’ve been using the BOSS Tuner on my phone for a while now.

I also had insTuner for a while and it was fabulous. 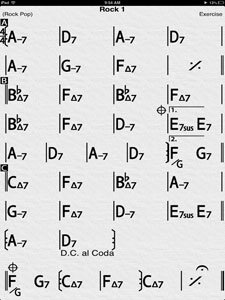 Many jazz uke players are probably familiar with the Real Book series. It’s a songbook comprised of simple lead sheets that show the basic timing of chord changes and melody.

The iOS version doesn’t allow editing of a melody, but for making charts that show chord changes, it is great.

By laying out the measures of chords in your song and identifying the different sections, iReal b creates a backing track at whatever tempo you like that plays back your chord changes with keys, guitar, bass, and drums. This is great for working out the lead part in a song or just to help you get the timing of a tricky chord change down.

In addition to viewing the charts and playing them back on the iPad, you can export the charts to PDF for access elsewhere (I like to send them right to Dropbox).

The biggest resource iRealb bring to the table is thousands of pre-made charts you can download from their forum in seconds. They are assembled into collections so you can download 1300 jazz standards in one go. 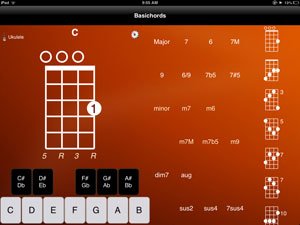 The title says it all… Any ʻukulele chord you could consider “basic” can be found in the Basicchords charts. Major, minor, 7th, diminished, 6th, suspended, etc… Plenty enough chords to keep me busy. 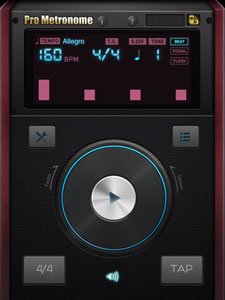 Click, click, click. The tap of a metronome is many people’s worst nightmare, showing the honest truth of where your timing stands. As challenging as it can be, working with a metronome does wonders for your timing, so it should be used for what it is – a tool.

The Pro Metronome app has a very basic layout, but many options to help your practice.

You start and stop the click with a big play button and change the tempo by turning a big virtual knob – enough to keep a musician busy for the rest of his or her life.

To make the app even more useful, there are options that change the time signature and feel along with control of accents. 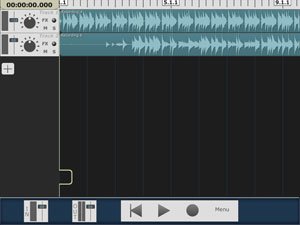 GarageBand does a lot of things really well, but misses several very key tools that are needed to fine tune a recording.

DAW Multitrack steps in as a simple multitrack recorder with the raw audio editing options that GarageBand lacks. It doesn’t do sampling or software instruments, but it does have EQ, delay, reverb, and compression for each track as well as more detailed editing options like fades. The app handles 8 stereo audio tracks (expandable to 24 via in-app purchase) and can simultaneously record on all of them.

DAW is a bit harder to figure out than GarageBand, but there is a detailed help guide that walks you through each section and feature. It supports 24 bit/96.0kHz recording quality and is definitely quite an upgrade from GarageBand for pure recording capabilities.

There is a better full-on recording program for iPad called Auria ($25) that I haven’t had a chance to try it out. At a certain point you might as well put your money towards a setup based off of a computer since it is so much easier to edit and share files from a real OS.

I’m an ‘ukulele artist from Honokaʻa, Hawaiʻi, where I run this site from a little plantation house in the jungle. I’ve taught workshops internationally, made Herb Ohta Jr. laugh until he cried, and once jammed with HAPA onstage in my boardshorts. More about me