Bending (also referred to as “string stretching”) the strings of an ukulele allows you to move seamlessly between two nearby notes. It’s a soulful sound that creates a nice sliding effect when done correctly.

There are a couple of different bends that can be performed. The most common are whole (2 frets), half (1 fret), and ¼ step bends (somewhere between a fret). Bends bigger than a whole step, like 1½ or 2 whole steps are harder to pull off, but by all means, see what you can manage!

The concept behind bending is easy, but putting it to practice is hard. 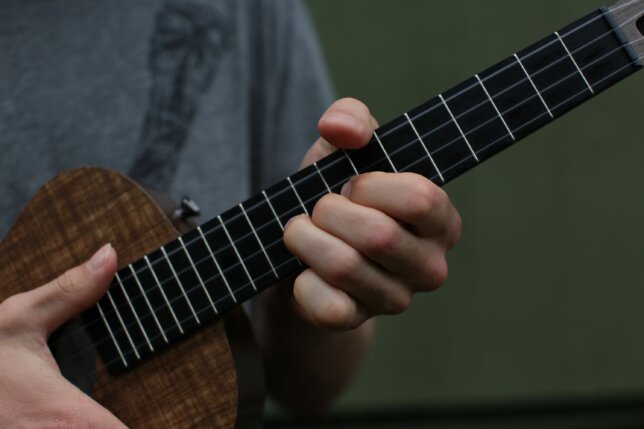 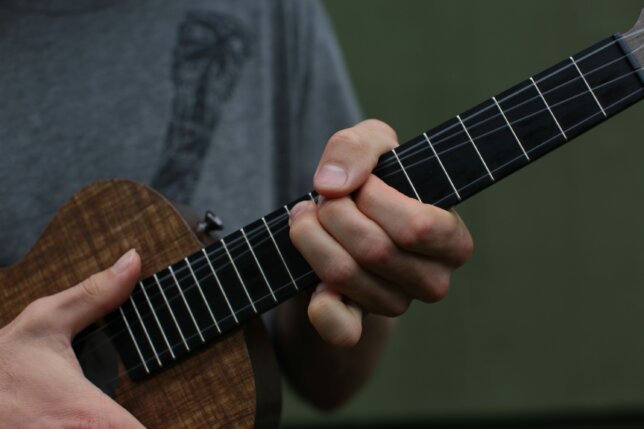 The main mistake I see people making when bending is trying to use only their finger muscles to push the string up. You barely need to move your fingers if you are rotating with your wrist – this is where the power comes from. Make sure you are transferring as much energy from your wrist movement into your fingers as possible. The second worse mistake is twisting your wrist, but letting your fingers “soak up” the string. Keep your fingers fairly stiff and use the wrist leverage to push them through the string.

You can also pull down to do a bend. For example, if you are bending a note on the C or G strings, you will run out of space quickly if you try to bend up, so rotate your wrist clockwise and pull the bend down using the same technique.

Here’s a video tutorial I made years ago of how to bend on the ukulele:

Some guys/gals just wail away at bends without a lot of heed for bending to a musical note. I think of “musical” as being nice-sounding and to the point. Since a bend kind of “overrides” the automatic tuning of the fret, you are in charge of the pitch of the note. This aimless bending is due to the fact that many people don’t have a destination in mind when they start a bend. When you fall short or over-bend a note, it’s unattractive to the ear. Thus, if you decide to pursue bending as a technique, it’s in your best interest to practice “positive string stretching” (a term that Eric Johnson nailed). Positive string stretching is when you bend with intention to go somewhere (C to a D, D# to an E, etc…) and get the bend exactly in-tune.

To practice getting the pitch right, fret the note that you want to bend to, and play it. This is your reference note. Now, with that note still in your ear, fall back 1 (half step bend) or 2 (whole step bend) frets, pick and bend up to match the reference note. This is a great way to develop your ear. By doing this you also learn how the different bends sound going into different notes. Bending into C from B is going to sound different than bending in from Bb.

Pre-bending a note gives you even more bending options. With a pre-bend you bend before picking and then pick the note. From there you can release the bend down or not. Try this is conjunction with the above in-tune exercise as a challenge!

The gauge of the string plays a big part in the bend. Higher mass strings bend up to pitch faster than lower mass ones. For example, it’s relatively easy to bend up 2 and a half steps on an unwound low-g string. Try that on the A string and you’ll need much more effort.

Each string has a different tone so you can take that into account when deciding where to bend a note.

It is easier to bend in the middle of the string near the 12th fret than to bend closer to the nut. It’s pretty hard to bend beyond a half step when you are playing inside the 5th fret. The more tension a string has, the harder it will be to bend.

The articulations you can use on bends give you unlimited options. Here are some that come to mind:

I’m sure there are more, but you get the idea.

Ads support the free content you are viewing! You can also leave a tip or purchase some of my premium content.