It’s time to be confused! Modes are talked about quite a bit, but no one seems to know much about how they work or fit into music, let alone how they work on the ukulele.

A mode is a major scale that starts and stops on a certain note in the scale. Or they can be derived from a formula, but that takes longer to figure out.

The most confusing thing about modes is the fact that they are found and explained as part of a certain scale, but called by their own name. It’s the same thing, but with two ways to identify it.

*Formulas are built from a major scale.

All examples in this lesson use the C scale. The same applies for any scale you wish to use.

The first mode is called “ionian mode“. This one is familiar because it is the major scale. You start and stop on the root (1st note):

So if someone said:

You would just play in the root scale (C major).

The chord that fits over Ionian mode is the:

At lot of the music that is normally played on ukulele is in this mode. Examples are all around of how the chords and note interact. You don’t need to alter any chords in this case if you are playing in C Ionian.

The second mode is called “dorian mode“. Now you would play the C major scale, but start and stop on the 2nd note – D:

Now, because we’ve moved to “mode land” this becomes D dorian instead of “C starting on the 2nd note”.

So if someone said:

“We are playing in dorian”

…And the key was D, you would use a C scale for a solo, but emphasize the dorian sound by starting and stopping on D or other current-chord-notes. But you ARE playing D dorian.

The chord that fits over dorian is the:

Dorian is a minor sounding mode with one note that has an interesting “edge” to it. It’s almost a normal minor scale, but the 6th note is sharped (moved up one fret). The minor with a sharp 6 is the dorian sound. The sharped 6th means that all chords in the key that use a 6 now have that note sharped. Instead of building your chords around the normal scale, you build them from the mode.

“Oye Como Va” by Santana. That song is in A dorian. So that changes the normal Dm that is found in the key of A minor to a D major in A dorian. The chord progression for that song is: Am D.

The third mode is called “phrygian mode“. Play the C major scale, starting and stopping on the 3rd note – E:

Use a C major scale, but emphasize the phrygian sound by starting and stopping on notes from the:

That is an E phrygian scale (not “C started and stopped on the 3rd note”).

Phrygian has a minor, almost Middle-Eastern sound. Because of that you can use it to really emphasize an exotic feel.

The fourth mode is called “Lydian mode“. A major scale starting and stopping on the 4th note – F:

And you would respond with a C major scale emphasizing the notes from the:

“Flying In a Blue Dream” by Joe Satriani

The fifth mode is called “mixolydian mode“. It’s a major scale started and stopped on the 5th note – G:

You’d solo in C major starting and stopping on notes from the:

The sixth mode is another familiar one (can you guess why?). It’s called “Aeolian mode” and it is the same as a natural minor scale. Remember, a major scale started from the sixth degree is the relative minor. So you’d play a major scale starting and stopping on the 6th note – A:

[now the drummer is starting to wonder…]

Solo in C major with your main notes being from the:

Tons of songs. “Eleanor Rigby” by The Beatles, “Could You Be Loved” by Bob Marley, “Sultans of Swing” by the Dire Straits, “All Along the Watchtower” by Dylan and Hendrix.

The seventh and last mode is called “locrian mode“. This one sounds really bizarre and probably has zero uses for any practical ukulele player, but I’ve got to finish the list… Locrian is a major scale that starts and stops on the 7th note – B:

You would start and end you C major scale solo on notes from the:

[Stumped] A lot of metal music use locrian but besides little stints in and out of it, there aren’t any songs that would be considered popular that use locrian.

Here is a matrix I wrote out that shows how the modes are related to a certain note. It’s not very pretty but it would take much longer for me to do the same thing in “Paint”. The left column shows the root, or the note-name of the mode you’re looking for. Across the top are all of the modes. Below them, are the major scales you would play to match up the mode to the note. This goes back to the concept of “starting and stopping on”. The name of the mode you are looking for is the note you start and stop on and the note in the mode column is the major scale you would use. For example, if you want to find out what notes are in D mixolydian, find the D note in the left column then trace its row across to the mixolydian column and where the two bisect is the major scale that has the right notes: G. So you would use the notes of a G major scale started and stopped on D for D mixolydian. 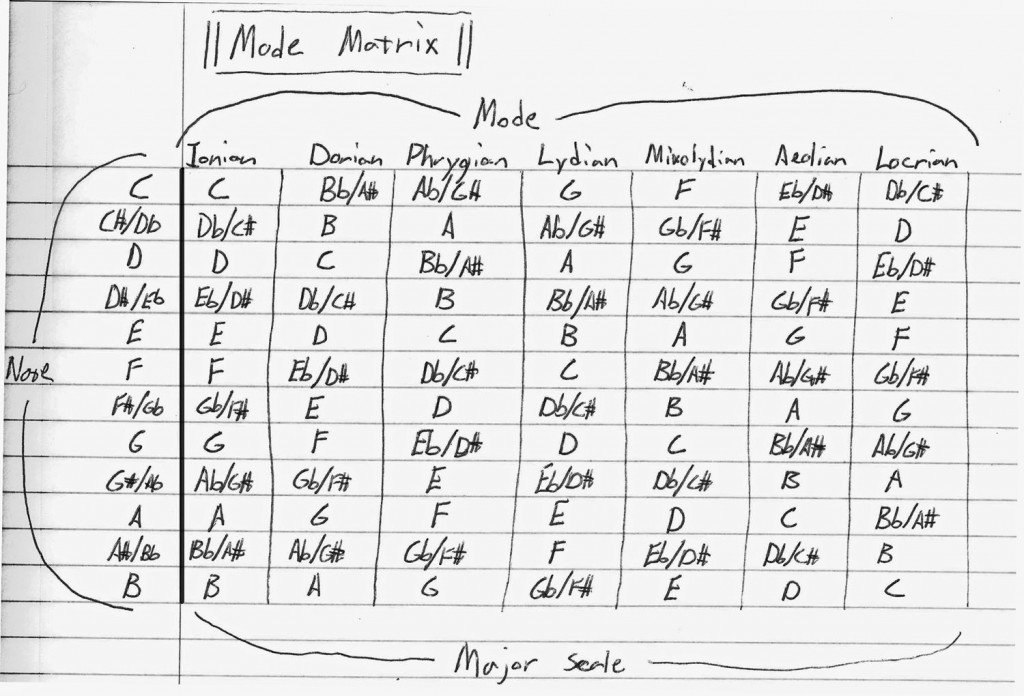