The Ukulele Capo: How to Transpose With Ease 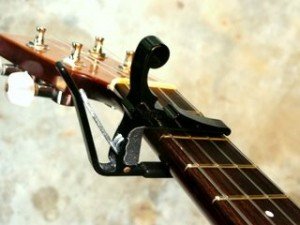 When you clamp a capo onto your ukulele you are essentially changing the functional tuning.

Instead of the open strings ringing when you strum no chord, a capo moves the sound up to the entire 1st fret, 2nd fret, 3rd fret, etc…

Normally the ukulele is tuned in GCEA, or C6, tuning. Put a capo on the 1st fret and you’re in C#6 tuning. 2nd fret? D6 tuning. All without turning a single tuning peg!

You can think of an ukulele capo as a movable nut. The terminating end of your fretboard changes from nut to capo any time you change the tuning in this way.

This can be tremendously handy for playing something you know in a new key. Instead of fumbling around and trying to relearn the part, just use a capo on the appropriate fret.

The Best Capo for Ukulele

The ukulele capo I’ve used is the D’addario Planet Waves NS ukulele capo. It’s tiny, simple, has a massive grip, doesn’t push the strings out of tune, and is an overall win.

Another common option that I had for years before the NS was the Kyser mandolin/banjo capo. It’s much more clunky, but was all we had for a long time.

Using a capo is considered “cheating” by a lot of people (me included, most of the time). It is not to be used as a substitute for learning chords and keys.

But it will save your butt when you are called up onstage to play a song in F# that you usually play in F.

It also allows you to play an open-string riff in other keys. Use it as a creative device to make something impossible possible.

How to Use a Capo on Ukulele

Using a capo is easy. You just have to think of it as a movable nut.

Clamp it on the appropriate fret and play chords or picking from a key you know.

You can play in the key of G using chords from the key of F if you put the capo on the second fret. For instance, F like this becomes G if you play it on top of a capo on the 2nd fret.

Using chords from the key of C, you can play in the key of D (with the capo still on the 2nd fret). And so on…

Transposing With a Capo:

There are only a few “key shapes” that will be used with a capo, so figuring out where it needs to be and what shapes to play should be pretty easy. Here are some common capo “chords to keys“.

For example, if your friends are going to play Ulupalakua in A, but you only know it in F. No biggie. Put your capo on the 4th fret and play along. Use this opportunity to get familiar with the chords you are playing (the actual chord names, not just the shape). If you learn the chords as you go along, next time you need to play the song in A you will know it.

My favorite use of a capo on the ukulele is by James Hill playing backup for Anne Janelle on her song Good Lover. He’s playing in a key that is comfortable for Anne to sing in. Without the capo he’d have to work a lot harder. He’s tuned in D – A D F# B and the capo takes him up another two frets.

Here’s a tab for the riff: