Five, six, and eight-string ukuleles have a beautiful chime-y sound. They can achieve a more full, jangle-y sound than a standard uke because of their additional strings.

But for all the benefits, one of the biggest drawbacks of these instruments is the challenge of tuning. More strings take more time to tune and, for a beginner, even knowing WHAT note to tune each string to is a real challenge.

This guide on tuning Liliʻu (6-strings), 8-string, and 5-string ukuleles will help you make sure you’ve got it right.

Something all three of these ukulele tunings have in common are strings paired together. A “course” is when two strings share a tight spacing and are played together as one. A course is tuned either to the same pitch or an octave apart.

The hardest thing to comprehend about courses is how they are played. A course counts as one string. All that’s different from a four string uke is that there are two strings you need to hold down instead of one.

For instance, if I want to play a C chord on an 8-string ukulele, I still need to press down the 3rd fret of the A-string. But since the A-string is tuned in a course, I have to actually press down both the bottom strings that make up the double course.

Since courses are considered the same string, they aren’t meant to be played separately. If you are supposed to pluck the C-string, you pick both the C-strings in the doubled course.

So if you’re excited about a 5-string ukulele because it will let you play solo fingerpicking arrangements with the low-G and also campanella style with a high-g, you’ll be disappointed. The tight string spacing makes it very hard to pick them separately.

The 6-string ukulele – also known as the “liliʻu” – was pioneered by Sam Kamaka Jr. in 1959 to commemorate the Statehood of Hawaiʻi and our last Queen, Liliʻuokalani.

It’s a bold sounding tenor uke that’s great for rhythm playing and is well known for its use accompanying hula ʻauana. Here’s a real clean example by Pomaika‘i Keawe rocking the six-string with an ace backup band.

There are several variants of the liliʻu tuning. However, all feature a double course on the C and A-strings.

The traditional Liliʻu tuning uses a high-g tuning with octave pairs on the C and A-string courses.

The C course is tuned high-C (the C above the pitch of an A-string) and standard middle C as on a normal uke. Usually, the high-C is closer to the ceiling.

The A course is weird because it’s tuned with a low-A (a whole step above a low-G) and a standard A-string like normal. Usually – as on the modern Kamaka HF-36 – the low-A is closest to the ceiling.

All together it would be: g cC E Aa (high strings shown with lower-case letters). 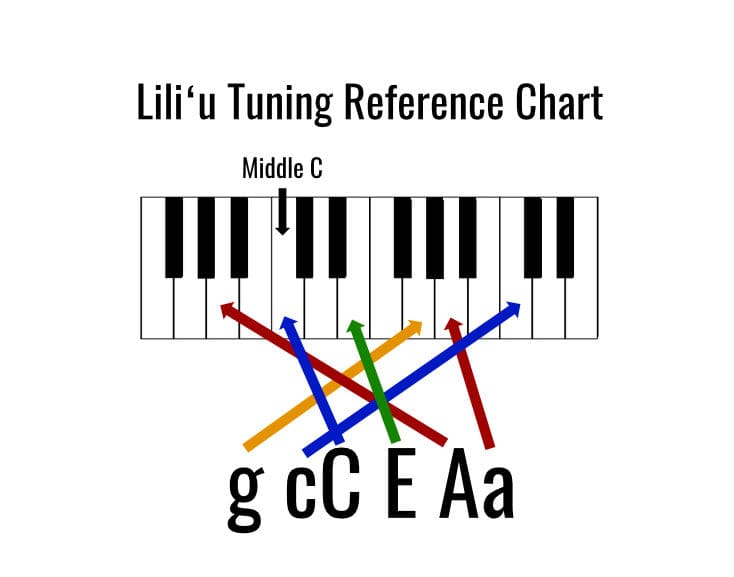 Sometimes the strings in the courses are reversed. If you look closely at Pomaikaʻi’s older Kamaka in the video, you can see that the larger low-A string is actually closest to the floor. Whether this is by design, preference, or unconventional wisdom, I’m not sure. But it just goes to show that there are many ways to tune a 6-string uke.

Other variations are: low-G, unison C course, and unison A course, or some combination of the three.

If you have a liliʻu, look at the nut slots. One side of each course should be obviously larger than the other. This wider slot is where the low string should go.

Unless you have a really good reason to do otherwise, I would definitely arrange the strings as the nut slot on your 6-string dictates. If you try and create a custom string orientation, you’re not guaranteed to have the strings sit in the nut properly. This can make the uke harder to play and requires a setup to fix.

A liliʻu is different than a guitalele! They both have six strings, but the guitalele uses an ADGCEA tuning without courses. This is a tuning exactly like a guitar capoed on the 5th fret that goes from low to high.

An eight string is the uke equivalent of a 12-string guitar. Every string has a double course and it has a big, giant, rich sound.

Here it is in a strumming setting as implemented by Nā Hoa.

The nice thing about the 8-string is that its tuning is pretty much locked into convention. Nine times our of ten, an 8-string ukulele is tuned gG cC EE AA.

Reversing the strings in the G course is probably the most common variant to the 8-string tuning you’ll see. 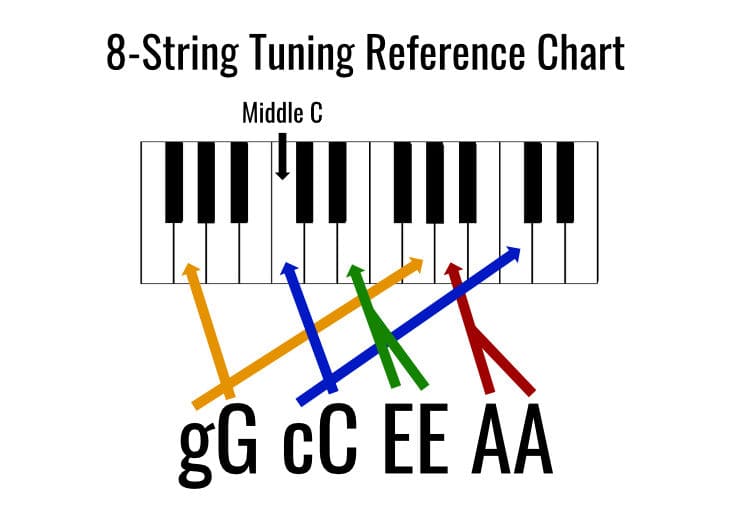 An 8-string is usually tenor sized, but can sometimes be a baritone. In this case, the tuning is dropped down to dD gG BB EE.

The five string ukulele is a modern variation that gives you both G-string options. That means it’s tuned with a low-G AND a high-g in a doubled course.

The high-g is usually on the top. So all together: gG C E A.

Taimane is a heavy user of the 5-string setup and has played one almost exclusively for at least a decade.

The thing about a 5-string that many people don’t realize is that since the high-g and low-G come together in a course, it’s not like having independent high-g and low-G options. It’s very difficult to pluck each string individually.

A 5-string should be bought for the sound, not as an apparent functional solution for option paralysis. 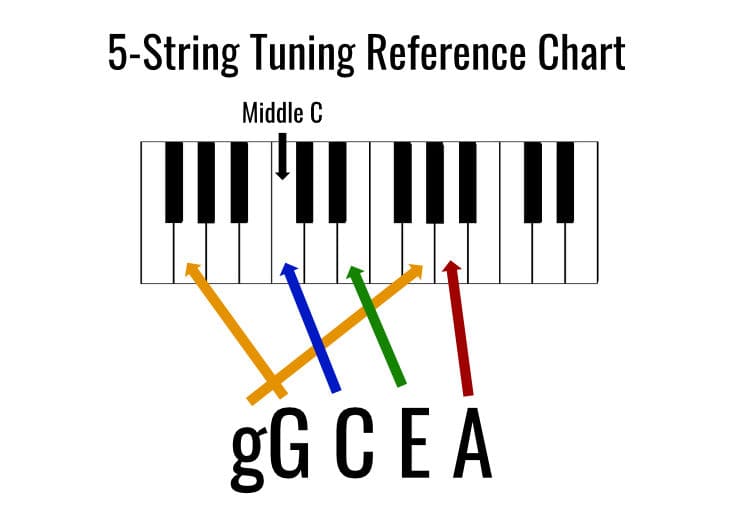 There aren’t a whole lot of ukes you can get set up for five string, but it’s an interesting new development. That might float some people’s boat.