The Farallon is a weather resistant and environmentally stable ukulele from San Fransisco-based instrument builder, Blackbird. 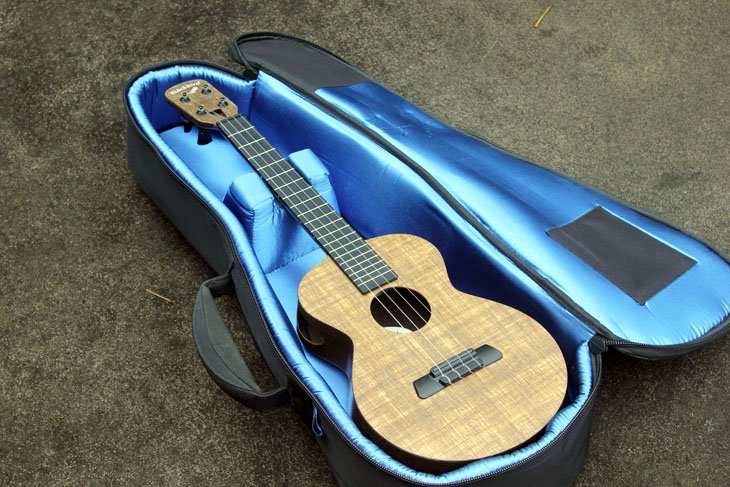 It’s been on my radar since it came out, but I could never justify spending the money on it as I couldn’t see how it would fit into my arsenal. My Moore Bettah is the best uke you can get – why buy a Blackbird?

My group played for a wedding at the Mauna Lani hotel (where it rains approximately never – our desert). All was well while people were arriving at the ceremony. But later at pupu hour it started raining.

Here I am with my priceless instrument made by Chuck Moore and a full PA setup that cost me $2000~ in aloha attire getting soaked on the one day out of the year it rains in Waikoloa. Needless to say, I was in a pretty sour mood by the time we were done.

I drove home and did two things that night:

Some weeks later UPS arrived in the driveway with a new uke. 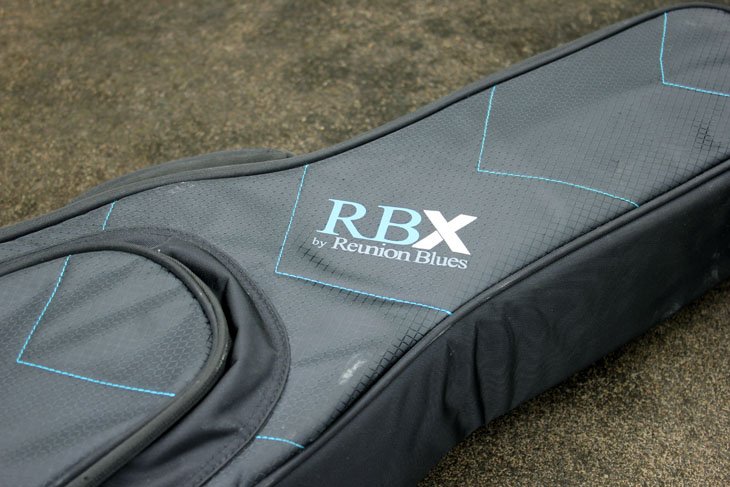 The Farallon is the first instrument I’ve bought in over a decade. I think that says a lot.

I’ve been playing it since mid-June and feel like it’s high time to give it a review.

My trust in the Ekoa idea came about from my friend, Dagan Bernstein, who bought their Savoy guitar. I was struck by the Ekoa stability when he told me that he first took the guitar out of the case (after being shipped from San Fransisco to Hawai’i), strummed it, and found it perfectly in tune.

Besides, it sounded great, was well built, and was made out of linen.

Blackbird has, in the past, built carbon fiber ukuleles as an alternative to using wood. These were great instruments, but didn’t seem to gain a whole lot of traction in the marketplace.

Not to be dissuaded from a good idea, Blackbird figured out a way to build a similar instrument using natural materials – linen fiber. This yielded a much more natural wood tone and produced a “green” product. 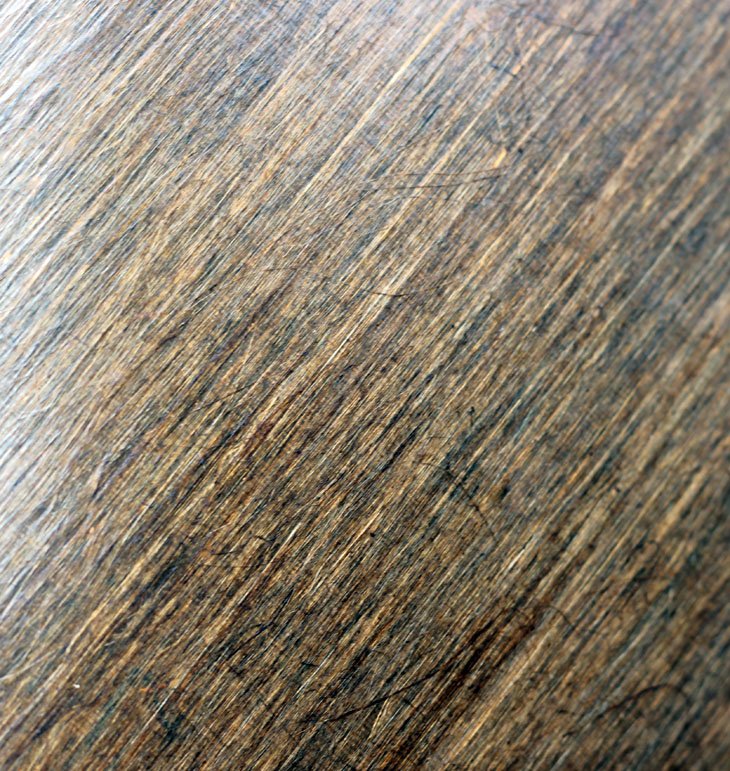 Closeup of the fiber pattern on the back.

It’s marketed as a “vintage” tone. To me this implies an Ekoa uke sounds like a 60-year old wood instrument. I don’t really think it does, but there’s no doubt; for what it is, Ekoa creates a very pleasing sound.

Using this fiber and resin building technology also yields a very sturdy uke. It’s super strong for the weight and doesn’t have a care in the world what the humidity or temperature (within reason) is. I certainly wouldn’t submerge it in water, but for a rainy gig, I won’t hesitate to abide by the saying, “the show must go on.” 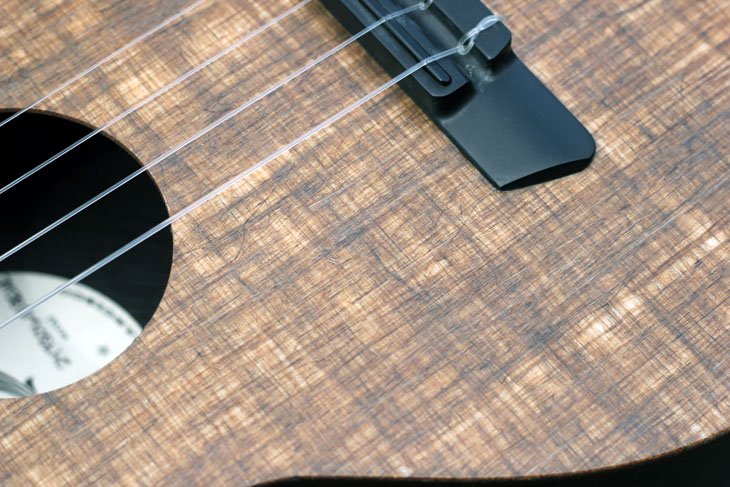 The marriage of the Ekoa’s sound and stability makes it attractive to performing musicians in a way that other waterproof ukuleles aren’t. While I don’t worry about taking my Outdoor Ukulele in the ocean and leaving it in my car all the time without a case, it sounds like a five-gallon bucket.

The Farallon sounds great AND is also strong and water resistant.

The Farallon itself is only available as a tenor ukulele (starting at $1,492). It has a distinct bout shape that makes it identifiable, but other than that, the difference between it and a traditional uke aren’t obvious. I’ve had people ask, “What kind of wood is that?” 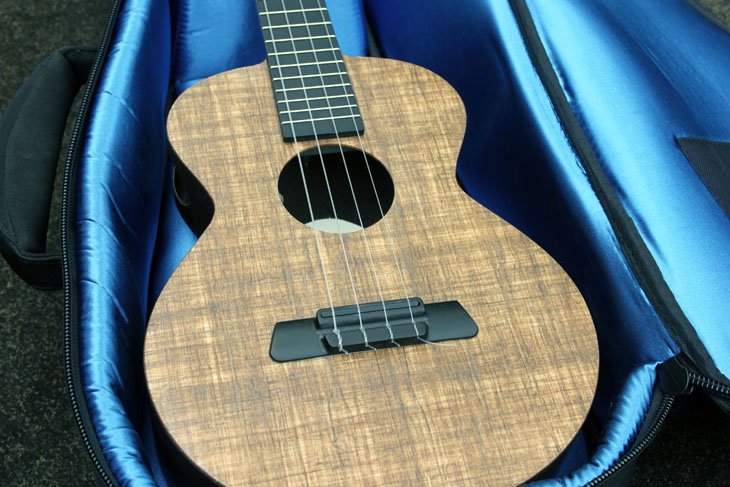 The top is beautiful in a random way that highlights the crisscross fiber pattern. It has a satin finish that reminds me of certain drum heads. I imagine you could play with brushes on the top and get an appropriate sound. One friend commented that her strumming hand noise seemed louder than she’s used to.

An injection molding process forms the back and sides as one piece so they are fused together with a generous bevel. The back is also quite arched which makes it comfy to hold. 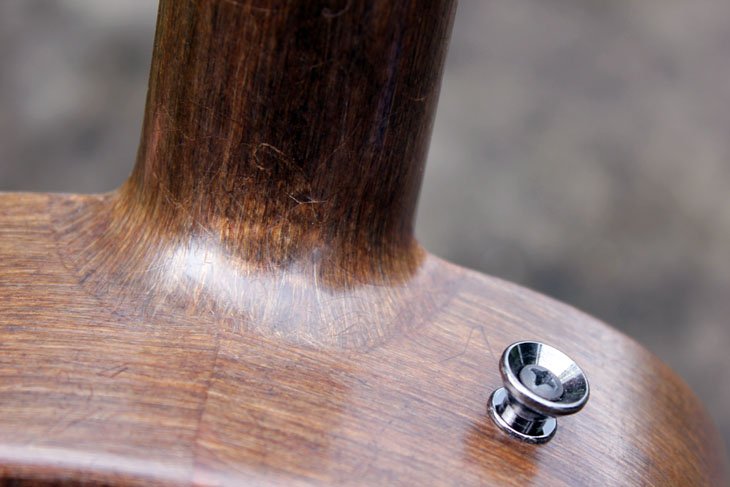 There is a mini soundport in the headstock that allows resonance from the hollow neck to escape. No idea what effect this might have on the sound, but it’s fun to listen to a miniaturized version of what you play coming out of the hole. 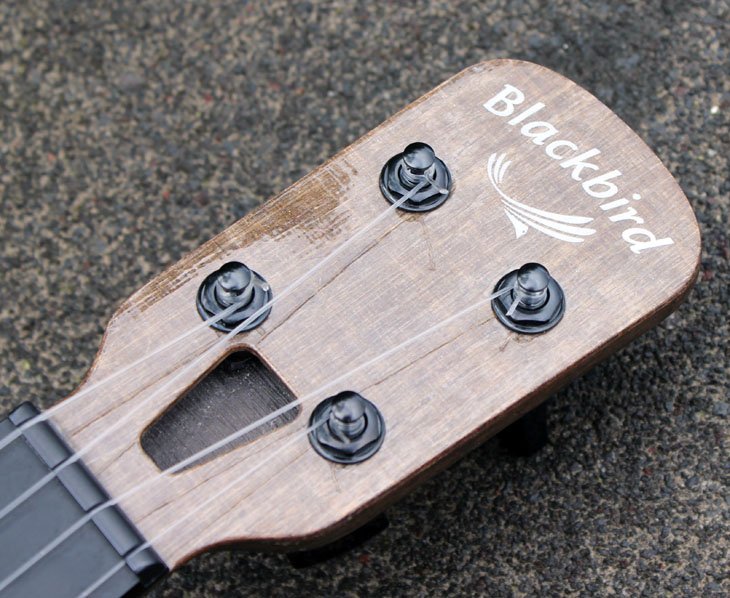 The headstock is compact and simple. Blackbird has opted for planetary in-line tuners on this uke. They are very high quality Gotoh UPTs, which get rave reviews, but I like a little more precision and, from a functional standpoint, would be more happy with standard geared tuners. However, I appreciate the light weight and streamlined look the UPTs bring to the Blackbird. 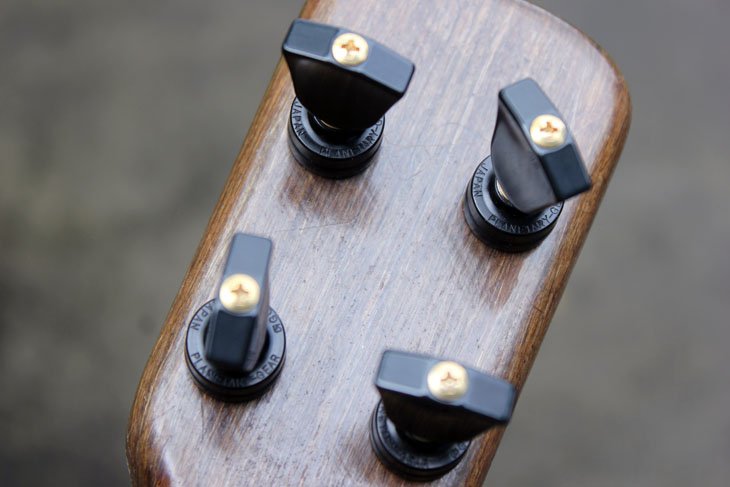 I really like the uber-dense fretboard material. It feels very substantial under your fingers and has a great, flat black look. There aren’t any markers on the fretboard, but top dots guide the way in a more minimalistic fashion. Hooray for top dots!

Each Farallon ships stock with strap buttons. It also comes with a high-quality gig bag.

There are several boutique options available for a fee. The radius fretboard gets a lot of attention, but I don’t feel like it’s very useful on an ukulele so I didn’t get it. However, I did spring for a side soundport (which Blackbird recommends for low-G). They are quite generous with the hole size and it lets the low end breathe a little more. You can also get fancy top dots, a sunburst finish, and custom inlays.
My Farallon’s only sticking point was the pickup. I emailed a bit with Joe about it and, after hearing his love for the MISI with Fishman UST, gave him the go-ahead to install it. It sounded fine. No complaints, but I only got through one gig before it started acting up – popping and then turning off.

I just happened to be on O’ahu the following week and was able to stop by Hawai’i Music Supply for a fix (all taken care of by Blackbird). Joel put in an LR Baggs Five-0 (my first choice for a pickup) and I haven’t had any issues since.

A Blackbird is not a wooden instrument. As you might expect, it doesn’t exactly sound like one. But it does sound good. Great, really. It’s just different.

Most instruments have a character. They might have exaggerated midrange or crisp highs – detailed quirks. But with the Farallon, it feels like the frequency response is almost perfectly even. It sounds ultra refined and pure, leaning towards a clear high-end.

It’s an inspiring sound. I found myself playing things in ways I wouldn’t otherwise think of with the Blackbird in hand. I find it’s a sound very suited to Hawaiian music and slack-key style playing. For some reason it just works.

The sustain is great, allowing you to sit back with your playing a bit more and let the instrument work.

Any time you spend over a thousand dollars on an ukulele, you expect it to play very easily and be comfortable to make music on.

But still, I was floored when I pulled the Blackbird out of it’s case for the first time. It plays smooth and easily – probably better than any ukulele I’ve ever picked up. Playing things that you might have to work for on another instrument are a total no-brainer on the Farallon. 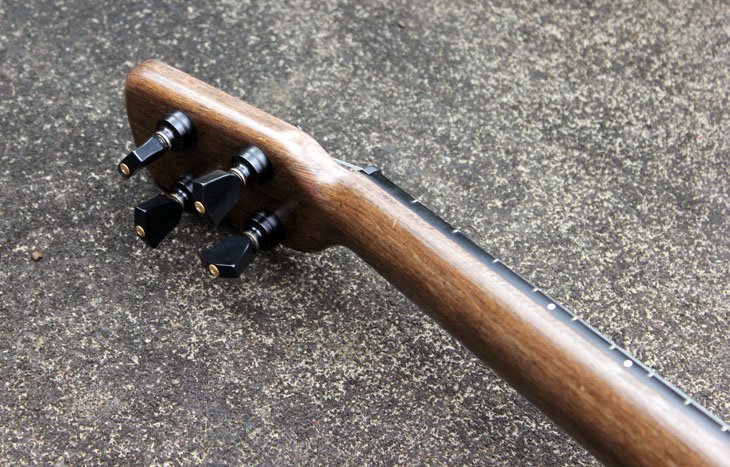 The action is fairly low, but I have a feeling it’s not as low as you’d think. With the perfectly finished frets and dead-straight neck, it feels dreamy.

Notes across the fretboard are amazingly balanced. There aren’t any weak spots that I can hear. Any note you pick projects like a laser beam, perfectly in tune.

While the whole ukulele is great, my biggest kudos go out to the Blackbird set up.

I got the Farallon tenor for a specific purpose and it delivered in spades. Blackbird has obviously really done their homework and is eager to provide a superior instrument. I don’t see anything better coming along in the near future. And that’s just fine because the Farallon is an ukulele I’m happy to stick with. 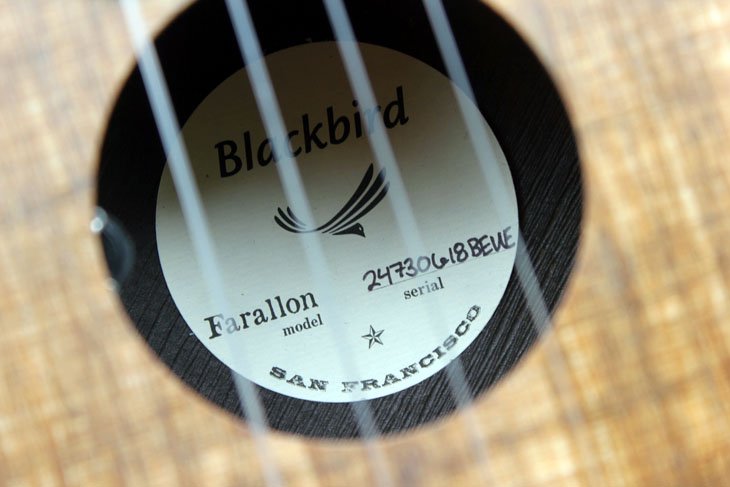 Like all new technologies, Ekoa still has some question marks in the dependability department. How will it age? Will it remain stable? Will the linen fibers start to rub out of the resin? Nobody really knows because there aren’t any old instruments out there built with the material. Time will tell.

For self-indulgent gigs where I get to play what I want, when I want, where I want (basically), I still play my Moore Bettah. But it gets replaced by the Blackbird any time I’m:

I find I’m pulling it out more than I expected I would. I’m picky, but this regular usage speaks to the quality of the uke.

It’s expensive. But for all that it provides, I’m glad I spent the money and have an alternative ukulele available when I need it. Mahalo to Joe and the gang for their dedication to quality and innovation.

If you want to get your own Farallon, you can order one directly from Blackbird with your own specs. They are occasionally available from The Ukulele Site as well if you aren’t as picky about your build.
Updated: June 18, 2021