The Music Lesson by Victor Wooten

On the page after the acknowledgements you find this: 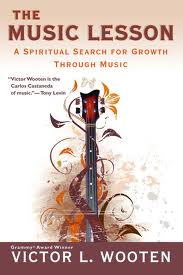 WARNING: Everything in this book may be all wrong. But if so, it’s all right!

And two pages later, after the contents, this:

Truth? What is truth?…And by the way, if I always tell you the truth, you might start to believe me. ~Michael

Quite a setup for Victor Wooten’s story, The Music Lesson: A Spiritual Search For Growth Through Music.

I say “story” and it is a work of fiction, but this book is the most informative thing I’ve ever ran across while learning music. I would comfortably say that a good 80% of what I know about music came from this tale. The subtitle says it all: “A Spiritual Search”. Not “A Note Search” or, “A Chord Search” or, “A How-to-play-fast Search”. A spiritual search. You will find no instruction on how to play scales or chords in this book (except for a brief touch on practicing the chromatic scale). But ideas for how to play all other parts of music? Indeed.

The story starts out following the first-person retelling of a young bass player’s Nashville-music-scene life. He is struggling to get steady gigs and the rent is almost due when a man named Michael shows up in his house. This Michael guy claims to be the young man’s teacher.

“My teacher of what?”

Uh-oh, Victor is making us think (as he does often in the course of the book)… It turns out that it’s true Michael can’t “teach”. What he can do though is “show”. And show he does. The book is divided into “measures” instead of chapters which is fitting because each is started with a hand-written bar of music (put them all together and you get Victor’s song “The Lesson”). In each measure Michael and his student cover a different aspect of music: groove, notes, articulation, techniques, emotion, dynamics, rhythm, tone, phrasing, space, and listening. Of course, Michael doesn’t limit his “showings” to just music things. As his student finds out, it’s all related.

Mr. Wooten writes about the healing powers of music also along with bringing on the heavy subject of how music is dying (in the book music is a she). In a dream the young bass player meets music and has a conversation with her.

“I never realized you were really alive.”

“I know. You have chosen not to realize it, and that is why your musical Life has never been alive. It is also why mine is fading.”

That is near the end of the book, and with all of the other thoughts Victor pours into his story, you really get wrapped up in how it all relates to your life. I found myself tearing up both times I’ve read the book. Music carries a lot of responsibility once you get to a certain point and Victor brings the realization of that home hard.

Once the student has learned everything Michael can show him, the teacher disappears. The bass player then continues on with life using what he learned, picking up steady gigs, and finally turning around and becoming the teacher of another struggling young musician.

It is a story, but it’s a very, very wise story. I heard Victor talk at a workshop and he mentioned that everyone had been wanting him to make an instructional book. That was the last thing he wanted to do because it would come across as “you have to do it this way”. Instead, he chose to put his ideas and wisdom (he’s been playing since he was two) into a fictional story so that he wouldn’t have to defend anything that he said, no matter how crazy. Because, well, it is just a story.

No, it’s not the best plot or writing ever, but it’s a fun journey for any musician to open themselves up to.

Support independent bookstore by buying The Music Lesson from Bookshop.org