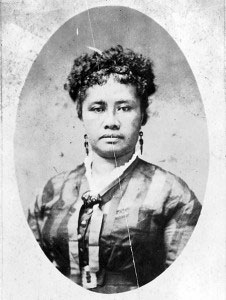 Hawaiʻi’s last Monarch, Queen Liliʻuokalani, whose reign ended with the overthrow of the Hawaiian Kingdom in 1893, is fondly remembered in the islands. Here’s an ukulele tab for her most famous song.

Liliʻuokalani led the resistance against the American Government as they sought annexation of Hawaiʻi to the United States and, because of this, was eventually imprisoned in her own palace for a period of time.

Whenever I read her writings I am in awe of her demeanor and good grace. Even as her Kingdom was being taken away from her, the Queen presented herself in a humble and dignified manner that seems to amplify the horrific misdeeds of the US government. For example, this is from one of her appeals to withdraw the treaty that would annex Hawaiʻi to the United States:

“Therefore I, Liliuokalani of Hawaii, do hereby call upon the President of that nation, to whom alone I yielded my property and my authority, to withdraw said treaty (ceding said Islands) from further consideration. I ask the honorable Senate of the United States to decline to ratify said treaty, and I implore the people of this great and good nation, from whom my ancestors learned the Christian religion, to sustain their representatives in such acts of justice and equity as may be in accord with the principles of their fathers, and to the Almighty Ruler of the universe, to him who judgeth righteously, I commit my cause.”

“…The honorable Senate of the United States…”??? That, my friends, is composure.

More well known to the general public and ukulele players is that the Queen wrote one of the most famous songs to ever come out of Hawaiʻi – Aloha ʻOe. It’s a fabulous piece that is just one of many. She wrote enough songs during her life to fill a whole (large) songbook.

What you’ll find here is a simple solo arrangement in the key of A which fits the melody well on the ukulele. There is nothing quite like picking through a beautifully simple song.

With nine hours HD video lessons for beginner, intermediate, and advanced players, Left Hand Technique For Ukulele will teach you how to optimize your movements, articulate your notes, and master the fretboard.