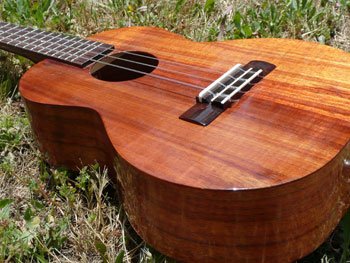 I’ve put off writing reviews of my own ukuleles for a decade now. Part of me just felt weird about putting that opinion on the site. It would be like writing a public review for a spouse. You can have an opinion, but it doesn’t really matter because for all the quirks and imperfections you still find a way to love the person – or not.

What my outlook on an instrument is doesn’t really matter as much as the fact that I’ve created a connection with each over the years. Certainly if things played out differently, I would have a different set of instruments that I loved just as much as my current stable. It’s hard to say which would be better because there isn’t always a “better.” Just different.

So, as opposed to a review, let’s take a walk down the path of my musical journey as seen by my main instruments. Instead of leaving you with a 5000 word dissertation on my ukes, I’ll divide their stories up instrument-by-instrument. 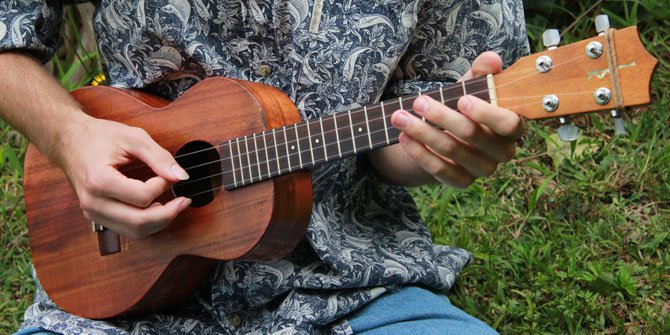 After playing a Hula Ukes tenor for a little more than a year, I began researching the next instrument I wanted to buy. This was way before internet reviews so I spent my time at music shops. I played lots of instruments, asked lots of questions, and absorbed as much as I could. I think there’s a lot to be said for feeling an instrument and hearing it in person as opposed to all of the window shopping that people can do online these days.

I narrowed my search down to a tenor from one of the three big Ks: Kamaka, Koaloha, and Kanile’a. Hilo Guitars and Ukuleles was my main haunt and they carried most of the ukulele brands available in those days. I played all of their relevant instruments again and again. Lots of “cool” people played KoAlohas at the time and I really felt like I wanted to go that route if I could. But there was hardly a KoAloha tenor to be found anywhere (I searched all across the island for months). When I finally tracked one down, it wasn’t any more special than the Kamakas or Kanile’as I had been playing.

Fast forward a couple visits to the shop and I was ready to buy. It was the day before Easter, 2007. I had enough money saved up and had decided on the HF-3. I can’t remember the main reason I decided to bypass the Kanile’a models in favor of Kamaka. But there I was. Brian, the very patient Hilo Guitars employee, must’ve been relieved that I had finally made a decision after so many visits and brought out four HF-3 Kamakas from the back of the shop. I felt like Harry Potter getting his wand at Olivander’s. I strummed each instrument and eliminated the ones that didn’t speak to me. Finally it came down to two favorites: an ugly one (so it seemed compared to the others) that sounded amazing and a pretty one that sounded alright.

I chose the ugly one.

$670-something later (I can’t believe prices have doubled since then!) I walked out with a shiny new uke in a case and an appointment to have a pickup put in. I spent the next six years honing my chops solely on that instrument and put those 11 cuts of wood through all kinds of torment.

We played in front of Herb and James and Keoki and Uncle Kimo and David and Uncle Dennis and Uncle George and Uncle Sonny and Brittni and countless other heroes, we wrote angsty little songs, we took lessons from anybody we could and went to countless jams, we met Kunia at Hapuna beach one day and couldn’t believe what he could play, we went to college together, we wrote a grand-slam instrumental to win the heart of a girl who was way out of our league, we played good gigs, we played bad gigs, we missed home together, we dreamed of touring the world, we played reggae in sketchy neighborhoods with great people, we played Hawaiian in rich neighborhoods with sketchy people, we made ourselves money, we made other people money, we made mistakes, we made happy accidents, we recorded a single, we won top honors, we island hopped on tiny-ass planes, we hopped the Pacific on 767s, and we made countless hours and hours of music and not-music. We have the connection that any two things have after ten years of near-constant companionship.

My friend said off-handedly the other day that relationships are a lot about who you spend time with and, if you spend enough time with someone you enjoy, you’ll fall in love with them. Whether that’s true or not for people is beyond me, but I think it’s certainly true for instruments.

Even if a uke isn’t perfect (or even close to it), you learn to appreciate the weirdness because it’s yours to appreciate. It even becomes an asset as you learn to work with it instead of against it. I don’t understand how people buy an ukulele every month and then wonder why it’s not _____, like the old one, or why they don’t feel a “connection” to it. There IS no connection! A month is years short of the familiar place you get to with an instrument when you can start making music without any reservations.

This is, of course, all just my opinion. But while I’m on my soapbox I’ll try and give some advice: Get a decent instrument and spend time with it. There’s no such thing as perfect – the missing element is human connection. You have to put in effort to extract the last 5% that would otherwise make it a perfect ukulele. That’s a lot of work. I’ve done my best with two instruments. I can’t imagine how hard it would be to feel comfortable on more in the same amount of time. 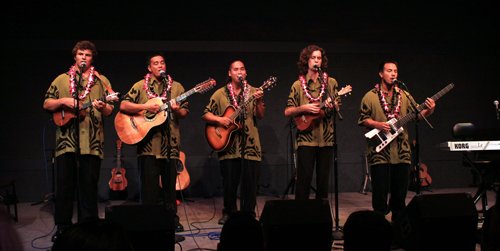 My HF-3 itself is made from solid koa on the top, back, sides, and headstock cap. The neck is mahogany and the fingerboard and bridge are rosewood. Schaller tuners are a joy to tune, even though their location on the headstock is a tad disproportionate and goofy-looking. I had the G-string nut slot filed bigger to accommodate a low-G string in the first couple weeks and have never put a high-g on it since. The big frets have taken a beating over the years. Most people can’t believe how pitted and flat they are. They still intonate pretty well, but it’s beginning to get to the point that you can feel the gouges in the frets as you play. 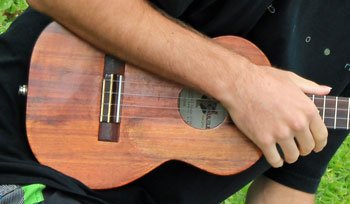 The build quality of the instrument has always seemed solid to me. Ten years later and there haven’t been any significant structural movements. The top is still pretty flat and the action is about as good as the day I bought it – even after using heavy strings for most of the years.

The only damages it’s suffered are two minor little pieces that broke away from their home. One was a chip out of the bottom of the fretboard where the edge of the fret slot (the 10th, I think) gave way. The exposed fret edge was sharp for a while until I just took a file to it and accepted the flaw for what it was. The second missing piece is the bottom bit of the bridge binding where pressure from the A-string cracked the material loose from its slot. Both happened many years ago and I’m convinced that they were just freak occurrences that couldn’t really have been prevented at the factory.

I’ve used Worth strings on this uke since probably 2008. They sound gorgeous with the koa and are clear and full without being woofy. CH-LGHD has ben my go-to set for all those years. They are heavy and unforgiving, but really keep the instrument “sitting up straight,” if you will.

When I first got the Kamaka I had a pickup put in right away. I chose a K&K Big Spot soundboard transducer for simplicity’s sake (and probably to save a buck). Having it allowed me to goof around and make noises with my Micro Cube as well as getting to be plugged in as a featured kani ka pila-er.

Problem was, the pickup was always feeding back and sounded boomy – on top of the piezo quack. $280 later I was the proud owner of a Fishman Pre-EQ Platinum preamp. It made a world of difference in the sound and I was able to notch out the offending frequencies. But it wasn’t until I took it to the shop that the guy there said, “Huh. Yeah, if I moved the transducer around a bit it would probably sound better.” It was night and day after his fix and restored my faith in SBT style pickups.

But as I got better, the gigs became bigger and the stages got louder. It was finally time to move on from feedback city. I emailed my buddy Chuck Moore and he suggested I bring the Kamaka down to his shop in ‘Opihikao and we put a MISI Acoustic Trio in it. 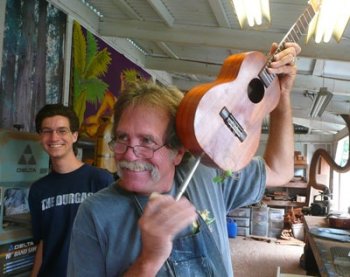 I had been to Chuck’s shop a bunch of time and seen the boneyard of parts that is a luthiers workplace, but when it came to my own instrument going under the drill I was a bit nervous! It didn’t help that he kept joking about messing up. The process was pretty simple: rout the saddle slot down as much as possible, drill a hole for the pickup wire, make a new saddle and put it all back together. In the end, my Kamaka was finer than ever and sounded like a pro uke plugged in. As exciting as the new chargeable pickup was, it was the camel bone saddle that really got me fired up. Even unplugged the instrument sounded better and felt more alive!

The last episode in the search for pickup nirvana took place at Mele Ukuleles in Wailuku. I was having issues with the consistency of string-to-string volume and their tech guy crafted me a new semi-segmented bridge. The separation between the saddle pieces allowed the strings to maintain a more even pressure on the transducer and fixed the problem.

‘Til Death Do Us Part 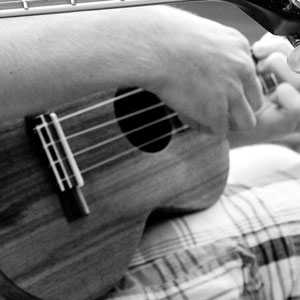 Because the frets have gotten so worn down in recent years, I don’t play the Kamaka too much any more. That was the only reason for upgrading in 2013. It’s been the most faithful instrument I could have ever hoped for and I plan on keeping it until the day I die, even if it’s in pieces by then.

She came out of the case for a handful of tracks on my new album where I needed some songs in a higher key to fit my voice. Instead of using a capo, I decided to put light strings on the Kamaka and tune it up to D6. The tuning definitely doesn’t suit the instrument, but it got the job done and really helped differentiate the sounds of the recordings.

After 10 years of walking the music scene and playing ukuleles, I haven’t seen a single thing that has made me regret selecting a Kamaka to be my main battle axe for my formative years. If you have the money and connections, you can get a better instrument than a stock HF-3 – no doubt. But before putting in all those hours of playing the HF-3, I’m not sure I would have appreciated a better instrument. It’s been a blessing to have spent so much time with such a nice instrument in my hands. 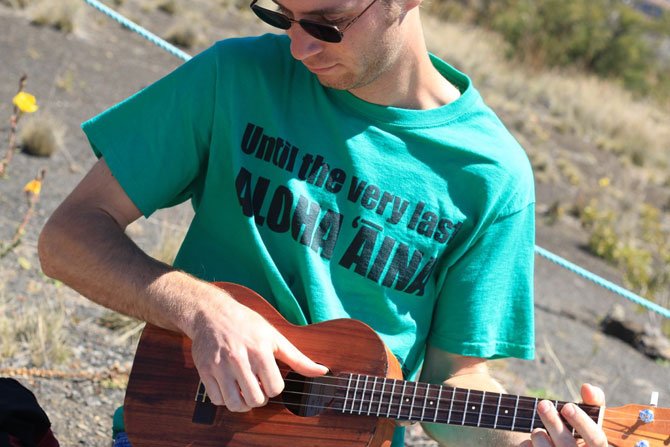