These are questions we’ve all asked ourselves when playing. Usually it’s a fault in technique. But occasionally it is a problem with how your ukulele is set up that creates the buzz.

Table of Contents:
The next section is on technique, but if you think your ukulele is the problem, not your playing, jump to the section on setup.

One of the best, most sure-fire ways to tune up your playing and achieve a more polished sound is to spend some time looking at your technique. Granted, some artist’s charm comes from sloppy playing, but usually a better aspiration is to play cleaner and without buzzing on your ukulele.

By playing clean I mean that notes are pure and buzzes are at a minimum. If your technique is crisp it leads to good tone and an easier time for the listener to hear what you are doing. It just sounds more professional.

Any beginner that takes the time to play clean will, almost certainly, sound like they’ve been playing ukulele for years longer than they have.

So how do you play clean?

By practicing the basics.

Many times we want to rush ahead and learn this new song or that new technique when really the best thing you could spend your ukulele practice time on is studying what you already know and making it better.

This isn’t going to light the world on fire, but when you play a note, you will really know how to play it properly. Imagine if you really learned every note in every song or scale you play. Can you see room for improvement? Just writing that question makes me feel the need to practice more.

When trying to make your ukulele a squeaky-clean, buzz-free machine you have to take physics into consideration. Creating a note takes a few steps that go something like this:

An action with seven steps takes a blink of an eye to play. To me, that’s amazing.

But physical motions can be broken down and performed in slow motion. A little bit of observation goes a long ways. In order to make your physical motions more efficient you have to see what you’re doing inefficiently and make a change.

It all starts with timing. To see what you need to improve on physically, you need to go slow.

Actually, to do pretty much anything on the ukulele you should go slow first. You can always go slower and you can always play slow for longer. You’re not hurting anything by working on a tune at 60 BPM for an hour. You’re. Just. Not. So if that’s what it takes – do it! Don’t speed up before you can play it perfectly slow. Learn how to play with a metronome.

Make sure that your fingers are in between the frets. Okay, that’s pretty basic, but it’s always surprising to me how often people don’t play precisely in the fret. 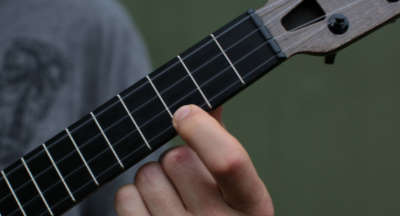 But if you want perfect efficiency (I applaud you), there is a sweet spot inside each fret on the ukulele where the leverage and tone makes for even more positive fretting. This pressure point, so to say, is just bridge side of the middle of a fret – maybe 2/3 of the way up to the next fret. You won’t hear angels singing when you start playing like this, but eventually it will allow you to play with less downward pressure on the string and keep that super clean tone.

While not affecting the cleanness of your playing too much, overkill finger pressure can slow you down and tire out your hand. You want to find a pressure that is enough to put the string in solid contact with each fret, but no more.

To find this happy medium, put your finger over a fret space, but don’t push down – just rest your finger on the string so that it is muted. Then, while picking that string steadily, begin to press down slowly with your fretting finger. Listen for the first sign of a note and buzzing. Keep moving through the buzz until the note is crystal clear and push until your finger is smashed up against the fretboard.

We normally play somewhere near the middle of the spectrum, but the best place to be is exactly in the middle with no wasted energy. Keep picking and slowly release your fretting hand, passing back into a slight buzz. Once you reach that first sign of a buzz, add a little pressure once more to bring the note back to full clarity. This is the amount of pressure you should aim for using on every note you fret, no more.

Another point of interest is the coordination between the left and right hands. In order to produce a note on the ukulele without buzzing, your fretting hand must push down into the fret a moment before your picking hand strikes the string.

On the other end, if you release your fretting hand before you finish the pick, you will similarly encounter buzzing or muting.

The solution for this is slowing down and studying your transitions from note to note. Be sure to get to the right fret by the time rhythm dictates the need to pick it. In order to do this you must be confident of where you are going next. Don’t rush away from it either. Hold that note until it is finished, then shift.

If you need more speed to do this, slow down some more. You are achieving very little if every note in a fast passage is skipped over in a rush to get to the next.

The previous thought leads into a simple one: think ahead. The further down the line you look, the easier it is to be comfortable with what you need to do on your ukulele. This is mostly a mental preparation that pays off instantly as you recall the next section of song.

Slow songs are easier to take stock of as you are playing. There is no rush so you can relax and take a peek into the future without worrying about botching what you are currently playing.

What does that tell us? Go slow! If you make a fast song as lazy as a slow song, you can practice looking ahead and become even more familiar with it.

Since we are interacting with the physical movements of the strings of the ukulele as we play, we have to keep in mind their limitations for producing good tone. One such limitation is the amount of vibrating space they have.

If you play an ukulele with low action, a string has .09″, .10″, maybe .11″ of wiggle room at the 12th fret. That’s not that much. The harder you pick, the further the string moves in its arc of vibration. An aggressive attack makes for buzzes and “bogging.” “Bogging” is the highly-scientific term for when a string just can’t put out any more sound and begins to sound dead because of it.

A simple solution is to play softer. That way the string will have some leeway before hitting the frets from vibrating. Depending on the instrument, you can still play pretty darn loud and not bog down. It’s just a matter of finding the edge and pulling back just a tiny bit.

If you can pick a string straight down and make it vibrate side to side, parallel to the fretboard, it won’t hit anything during its arc. I’m not saying to sit and make sure all your picking strokes are straight down. Instead, take a look at your attack angle and experiment to see if the tone tradeoff is worth it. If anything, you might find a happy-medium you like.

So far we have discussed mainly the playing of notes. Now let’s talk about the bystanders – innocent notes on your ukulele that sit quietly until you come along and bash their friend on the head! Sympathetic vibrations, hand chatter from shifting notes, and feedback (when plugged in) are all some of the extraneous noises that can be silenced with a little bit of clever muting.

Muting comes in two main forms: left hand muting and right hand muting. Both take some serious practice to get synced up and have absolutely zero chance of impressing your friends, but really make for a tidier presentation.

The role of either hand in muting is sort of interchangeable. That said, some things are better handled by one over the other.

Left Hand Muting is great for:

Right Hand Muting is great for:

My inspiration for writing this is ukulele performing artist Herb Ohta Jr. – the King of Clean. Listen to him sometime and pay attention. No buzzes, no hand noise. Just the notes he intentionally plays.

Such a pure sound that is a force to be reckoned with in itself, even if his music wasn’t as great as it is. I’ve asked him about this before and he said that the only thing he really thinks about when he is performing is playing clean. Maybe that’s it.

Poor Setup: Why an Ukulele Will Inherently Buzz

All the above ideas are related to how you play. But some ukuleles buzz even if your technique is perfect.

This is usually a problem with setup – how level the frets are and how high the strings sit above the fretboard. If the setup is bad, you could have any number of problems, from buzzing to intonation issues.

Inherent buzzing on an ukulele is usually caused by a high fret. If one of the fret wires push up from the fretboard (this can happen over time) or was never properly leveled from the factory, it will inhibit the string from ringing cleanly.

To check for a high fret you can lay a precise straightedge across the frets and see if it wiggles. I really like this little ruler from Stew Mac, but a lot of people use their purpose-built tool for finding high frets.

Alternatively, if you don’t have a straightedge, you can play the fret above the one that is buzzing. If it doesn’t buzz, odds are the fret creating the second note is the culprit.

In the past, I’ve been able to gently push down on a raised fret myself to fix a buzzing problem. But usually it won’t be possible and you’ll have to take your ukulele to a pro who can level the frets.

Depending on how straight the neck is and how level the frets are, the strings can only be lowered so much before they start to chatter on the fretboard. This is rarely a problem since factory ukes are most often sent out with high action. It’s easy to lower the action by sanding, but much harder to raise it.

Low action will cause buzzing along most frets of your ukulele – especially on the lower frets. Often the angle the strings break at is greater for the higher frets and they won’t buzz as much.

To correct it you need to raise the saddle. This can be done easily by shimming under the saddle with a small piece of wood or paper. Keep in mind that the saddle is how the vibrations of the strings transmit to the rest of the instrument. If you put a piece of paper under it the vibrations will be dampened and the tone can be negatively impacted. I would only do this as a temporary solution, personally.

A higher quality fix would be to create a whole new saddle. This can be finicky, but isn’t rocket science. If you’re a bit crafty you can buy a saddle blank and some sandpaper to make a new one. Just don’t throw away the old one in case you can’t get the new one to work.

If neither of those things seem to be the problem, check out the big list of possible buzzes over on Ukulele Underground forum.