How To Play a Chunk Strum On Ukulele

Out of all the right hand techniques for ‘ukulele, the chunk strum seems to be the most widely appealing – and most confusing – to beginning players. The confusion could come from the fact that the chop has many names, such as: chop, chunk, chuck, mute, chick, chock, and others (I might have made up a couple).

I prefer “chop” since its meaning actually matches the physical motion of the hand when using this technique, though “chunk” seems to be the prevailing term you’ll find around the web these days.

What is a Chunk Strum?

Instead of strumming and sounding a chord, you quickly attack and then mute the strings in a single motion as your hand moves downward. All this happens within a fraction of a second.

The sound is reminiscent of a snare drum hit; as a rhythmic device it’s often used in similar ways as the snare. Here’s a simple example of the chop strum in action:

You can identify the chop by its “chick” sound. In this example she strums down and then the second hit is the chop.It’s the popping, snapping, rasping sound happening in between the normal strum.

Using the chop strum is a great way to do several things to a strumming pattern:

In the ‘ukulele world, you can imagine strumming as the stomp and chopping as the clap.

Usually, when you strum you want a clean followthrough from your strumming hand. Any extra contact with the string is bad. It can create unwanted noise, right?

When you chop, you intentionally hit the strings with your hand so that it stops them from ringing.

Here’s how it works:

The finger should sound the strings before the palm mutes them a split second after. Don’t strum, then mute.

Here’s a before and after: 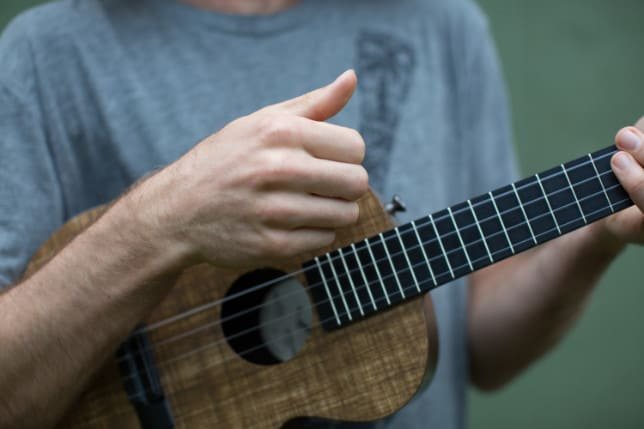 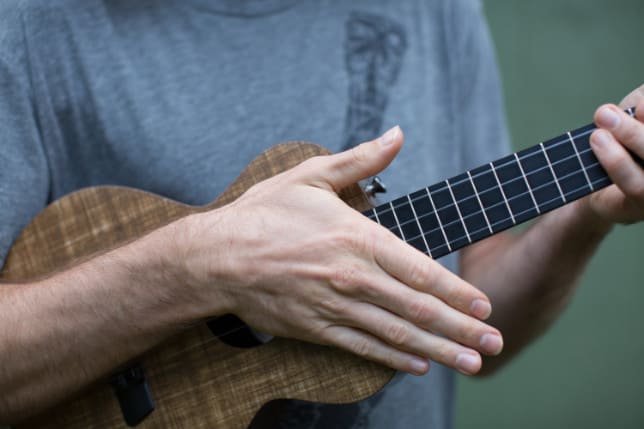 You shouldn’t have a chance to hear the notes of the strum. If you do, you need to shorten the distance between your index finger and palm – reducing the time between the strum, then mute.

I like to attack the strings with several fingers for a chop. These extra fingernails on the strings creates a bigger, more dramatic sound than a sole index finger.