Welcome to the alter-ego of the hammer-on! A pull-off on the ukulele is the exact opposite of it’s violent brother. Instead of hammering onto a higher note, with a pull-off you descend to a lower note. This is done by plucking and then removing a finger.

People often find this technique easier to play since the second note can be made to ring louder right out of the gate.

How to Play a Pull-Off

The Gist: Pick a fretted note then pull your finger off the note to sound the note behind it.

Like the hammer-on, a pull-off means you don’t pick the second note. Pluck the first note with your picking hand and then your fretting finger scoops into and down through the string, pulling it towards the floor, parallel to the frets, until it slips out from under your finger. This creates a second pluck from the reverse end of the string.

Depending on the situation, you can also play the pull-off in an upwards motion, pushing with your fretting finger.

With a pull-off you have to set yourself up for the second note. Otherwise you might get tripped up. Because you “reveal” the second note, you’ve got to be fretting it while you are picking the first note. Basically, this means fretting both notes at the same time.

Now pick the 3rd fret. As that C note is still ringing, pull your middle finger down and off of the string to reveal the second fret. This should transfer the sound to a B note, like this: 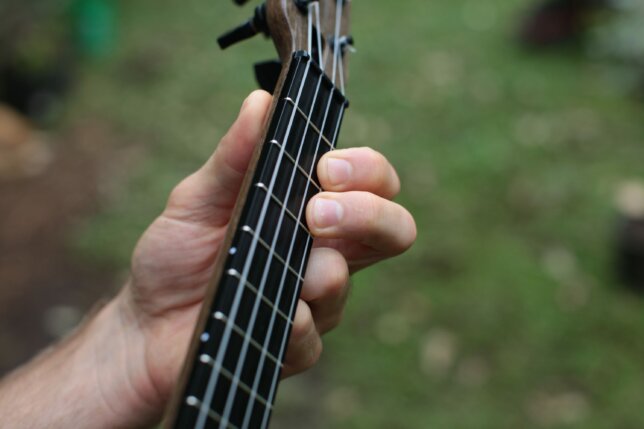 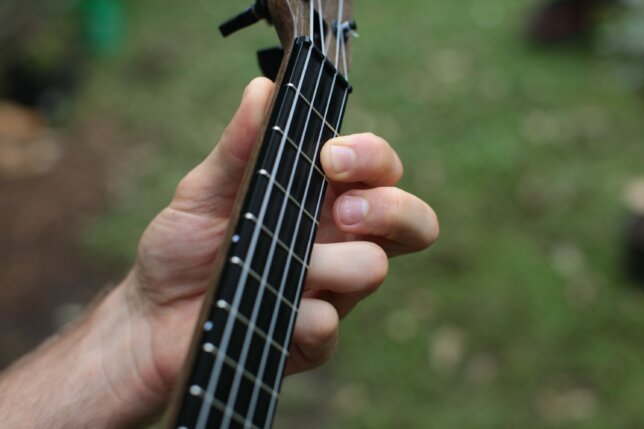 Try these other pull-off examples. In tablature (TAB), a pull-off is notated with a “p” between the start and end notes. I’ve also included some suggested fingerings (1=index, 2=middle, 3=ring, 4=pinky fingers):

You want to be able to play clean-sounding pull-offs anywhere on the fretboard. Practice bigger jumps and as many combos as you can come up with.

It’s impossible to do a pull-off to anywhere except an open string if you start by fretting with your index finger. You’ve got to have some foresight to put two complementary fingers down at the same time. Usually, you will start a pull off with your 2, 3, or 4 finger. This way there’s always somewhere to go. The exception to this guideline is when pulling-off from, say, the 1st fret to an open string. Then you can use your index finger.

Pull-offs are already a fast technique. They can be played even faster when strung together into several back-to-back pull-offs, like this:

What you do is pick a note in a scale and then pull-off to an open string. It might make sense to start with the major scale that the string is named after (A major on the A string). This will make it sound a little more cohesive and awesome right off the get go. To get more mileage out of that same pull-off movement, you can pick the open string a second time. Because of this second pick it might be a good idea to use your index finger, though I’m sure you can find a work-around if you like.

So the concept is:

Pick down, pull-off [whatever] fret to open string, pick up on the open string. Repeat.

I’ll use an A major scale on the ukulele’s A string as an example.

Practice speeding this up until your pull-offs are consistent and you will be playing the intro to Manoa DNA’s “Follow Me”. Here it is in full: Follow Me tab.

Another great song to practice this technique in is the Glass Ball Slack Key.

Use other scales and different starting points to add something new to the songs you already know. Practice one scale up and down a string, then go on to the next one.