For as long as I’ve had an ‘ukulele with a pickup I have been looking for a better amp. One that doesn’t feedback, spike treble notes, 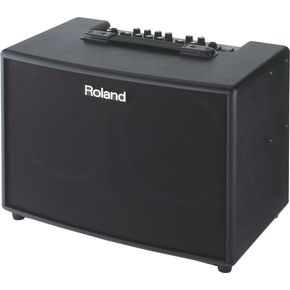 or bog down on the bass notes. And it should sound good (that’s not too much to ask is it?). For a long time I thought the problem was my pickup (a K&K Big Spot soundboard transducer) so I invested in a Fishman Pro-EQ preamp. That helped a lot, but my amplified Kamaka still sounded off. Finally after much research and thinking, I invested in Roland’s AC-90. Problem solved.

The AC-90 acoustic amp has 90 watts of power fed through two 8″ speakers and 2 small tweeters. It has two channels: one for an instrument and one that can be either a mic (XLR – with phantom power) or line input. Each channel has a volume knob, three band EQ and chorus switch (for engaging the chorus effect which is controlled outside the channel). The three onboard effects include chorus, reverb, and delay, but you can’t choose both ambient effects at the same time. An anti-feedback knob eliminates low-frequency feedback and a mute button keeps things quiet when re-routing cables or changing instruments. There is also a headphone jack and master volume control.

All of the extra in and out jacks are located on the back of the AC-90. They include line outs, a sub-woofer out, auxiliary ins, and jacks for optional foot-switches that control the effects and the mute function.

As for dimensions and weight… It’s not a Micro Cube, but for 90 watts, the size is pretty reasonable. It weighs 25 pounds and measures 18″ x 11″ x 12″. Roland is nice enough to supply you with a heavy-duty carrying bag with a big pocket for cables.

The sound the AC-90 produces is phenomenal! The only other place I’ve heard amplified sound so pure is on Jake’s Live album. It’s really incredible. Of course, it’s not perfect. A perfect amp would sound exactly like my ‘ukulele, only louder. That’s not the case, but it is close. The AC-90 has a subtle snap to its sound that I really like. With other amps the “snap” usually comes in the form of a “thud,” but the internal workings of the AC-90 nullifies this problem.

Note that there is no longer a need for an external preamp stage with this amp. I’ve tried adding my Fishman into the signal path, but it only muddles things up. There is a “magnetic/piezo” switch on the instrument channel that allows you to select an input level. If you choose “piezo”, the circuit boosts the signal more and acts as your preamp.

The two main problems I have faced amplifying my ‘ukulele in the past are spikes of certain frequencies (usually treble notes – 10th fret or higher – or bass notes). With the Roland you can wail away on the high frets as much as you like without hurting your ears. If the treble is still too harsh with the EQ flat, just roll off the treble knob to taste. As for bass notes, once you get the anti-feedback feature dialed in, there is no concern for rogue low-frequency notes.

There is a 1/4″ input on each channel so I’ve tried both with my ‘ukulele. The main instrument channel sounds best due to a selectable “piezo” input level which boosts the signal more. The line channel doesn’t have the “piezo” option and didn’t provide very good results, so I tried it with my preamp. The preamp helped, but the second channel still doesn’t have the “oomph” of the first.

Onboard effects include chorus and reverb or delay. The obvious bummer here is that you can’t choose to have reverb and delay on at the same time because of the single knob setup. A single knob control is never ideal, but it works well enough for the simple reverb which sounds decent to my ears (though I wish you could dial down the effect level and let the decay last longer). You can get just a subtle ambiance effect or a full-blown reverb “wash”. A setting somewhere in between sounds best to me and fills the sound in nicely without screaming “I’m using reverb!”. The delay is harder to use with the single control knob – all you can control is the delay time. It’s a digital delay so the rather high pre-set effect level is a little too obvious for my ears, but you could get a Ledward Kaapana/Edge type of sound easily. The chorus is the best effect on the AC-90. A single knob lets you roll through three different types of choruses and a button on each channel lets you turn the effect on or off. All three types of stereo chorus sound great (with a stereo chorus, the signal is split and a slightly different sound comes out of each speaker, making the sound HUGE!). The “wide” setting is most obvious, but the sound doesn’t warble. The other two modes are more subtle, letting you achieve a warm and wide sound without it sounding like the chorus is even on.

I had a MISI Acoustic Trio pickup put in my ukulele to replace the old K&K passive one with something active. The reason behind this was to have a PA-ready instrument at my disposal at all times in case I get called up to play with somebody.

The MISI is a better quality pickup than the K&K and sounds much better through a PA. But it sounds even better through the AC-90. There is something in the amp’s circuits that really polishes the sound. The only change I had to make was changing the level select switch to “magnetic”, which lowers the input so the active pickup won’t overload the amp.

So even with the option to plug straight into the PA, I’d rather run through my AC-90 first, then use the line out to get my sound to the mixer. That would allow me to get a little bit better sound, stereo chorus, and my own monitor.

The AC-90 is a win with active pickups too!

The Roland AC-90 is the best sounding amp I have played through. If you need a great amplified sound for a soundboard transducer pickup I would recommend it. However, due to the finicky nature of pickups, it would be best to try before you buy.

Update – May,2014: Unfortunately, my AC-90 died a few months ago. It still “works” fine, but only sporadically, which renders it absolutely useless for playing gigs. It sounds like it’s a rare problem with one of the circuit boards. I took it to the official Roland support guy on the island and he said that Roland doesn’t supply replacement parts for an item like this. They expect to replace the whole unit if there is a problem. WITHIN WARRANTY. I was, of course, out of the warranty period so my AC-90 is just furniture until I find some other circuitry to make a project with. The amp always was great. It could have been bad power that killed it – I didn’t always bother with a surge protector – so I can’t blame the amp itself. What I am disappointed with is how Roland would create a $700 product that isn’t repairable. That tells me a lot about a company.

Everything in the review above is still true, but, in the interest of full disclosure, I wanted to share my experience.

It’s $700 through Musicians Friend, but see if your local music store can match the internet price (they usually will) and support them instead.

Here’s my video review (with the old K&K pickup. If you want to hear the MISI, check out this video: https://www.youtube.com/watch?v=ItmVUqM6DO8):