How to Learn & Memorize Scales on Ukulele

With such a massive amount of information contained in even a single scale chart, it can be daunting to know what to do with a huge collection such as my FREE Ukulele Scales Collection. Here are some things to do …and not do with these scales.

How a Scale diagram Works

A scale chart serves simply as a map. It’s not music. It’s not an exercise. It’s just a bunch of dots that show you which notes exist where in a certain scale. It’s up to you to internalize these patterns.

All you need to know to read one of these charts, is that the string lines are presented horizontally as GCEA, from bottom to top (the A-string is closest to the top of the page).

Fret lines are placed vertically across the chart to create a 12 fret fretboard (open strings are shown past the “nut” on the left – this is the tuning).

You can think of it like a long chord diagram box turned on its side.

There are two versions of each scale shown in my Ukulele Scales Collection. (Get it here so you can follow along.) 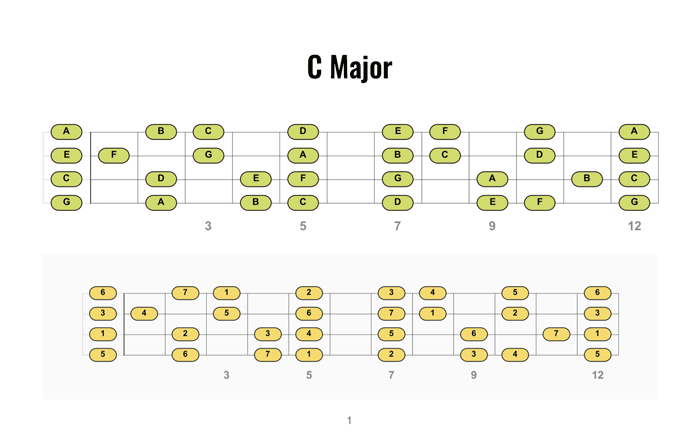 Scale Degree Version – In the second, smaller diagram, yellow dots highlight the same note locations, but show the scale degrees. The scale degree is how the note is related to the root (the name of the key and scale).

A scale that’s NOT a major scale will be shown with altered scale degrees (with sharps or flats) as they relate to the corresponding major scale. For instance, a C melodic minor scale is: C D Eb F G A B C. Since the Eb is different from the C major scale, the 3rd degree will be shown as “b3”.

As you use these scales, I hope you’ll notice that the note locations don’t change. A Bb note in one scale will be in the same location as a Bb note from a different scale. This means the note locations should become familiar as you go and give you a chance to memorize the fretboard.

Really, if you’re learning these scales, you’re either dedicated enough that you should have the fretboard memorized (or at least be working on it) or you’re a beginner who’s severely unsure how you got convinced you need to learn this stuff.

Most people who use fretboard charts like this are “learning their scales.” And that’s good. You can’t play music if you have to open up a PDF each time you want to know which notes you can play.

So how do you learn scales? By getting familiar with them. The goal is to free yourself from charts ASAP. Remember: these charts are maps. They visually represent something that already exists. They won’t drive you to your destination or make sure you’re navigating correctly. That’s up to you.

How to Practice Scales

The common place to start exploring scales is by playing from the root up to the root an octave higher and then back down. Do this from every root you can find. For instance, a C major scale can be started from the open C-string, 5th fret on the G-string (if you have a low-G), 8th fret on the E-string, and 3rd fret on the A-string.

Oftentimes people will memorize the box that accompanies a certain scale location, but the best way to get really comfortable with a scale is by playing up to the second octave as many ways as you can think of.

From the open C-string you can play a C major scale up the octave many ways:

Doing this will give you a good foundation for understanding where the scale lies on the fretboard. But music is never played up and down the scale in order. (The only exception I can think of is that Christmas song, “Joy to the World.” It uses a complete descending scale.)

To get more out of the corners and gaps that are more commonly used in melodies, I like to force myself to play the scale in zones. A “zone” is four frets you can play with the respective fretting fingers:

This “zone” finger pattern can be used for any four consecutive frets. Sometimes to reach in-between notes you need to stretch on one side of the zone or the other. This allows you to play a complete scale.

By moving the zone up one fret at a time and playing the notes that are available to you, you find cool patterns that you otherwise wouldn’t think to play. Like this example in C (reaches shown in parenthesis):

A variation on this exercise is to play ALL the notes in the scale available in a given zone instead of trying to only start on the root note. This will yield more than the typical eight notes you play going do re mi fa so la ti do, but it will help you to see beyond the confines of an octave. The 2nd to 5th fret zone covering all possible notes would look like:

Another spin off is to play up the zones using ascending scale degrees as your starting points (and using your first fretting finger to dictate the zone). With C Major you could start with the basic open position, then hop up to play from D to D in the 2nd to 5th fret zone, then E to E in the 4th to 7th fret zone, then F to F from the 5th to 8th fret zone, etc…

You’ll still need stretches to do this. Without getting into theory, you’re now playing through all the major scale modes. (A mode is just a major scale started from a certain scale degree. If you want to be confused, open up the D Dorian and E Phrygian charts and compare them to C Major.)

All good stuff so far, but melodies rarely appear like this. It’s more typical to see a three or four note ascending or descending melodic pattern. Which is why my very favorite scale practice revolves around sequencing in groups. All a sequence is is a number pattern that you apply to every note of the scale.

For much more on sequencing scales, check out my lesson on it.

Do you need to learn all the scales here? No. Absolutely not. Most great musicians I know get away with just playing major and minor scales. Anything else is just a “weird” note here or there to fit around a chord or spice up the sound.

Once you know the major and minor scales, pentatonic and blues scales can be useful for their sparse and bluesy sounds.

Modes are simply a complicated way of looking at major scales from a different perspective. The most common and decent-sounding are: dorian and mixolydian. Phrygian is a cool approximation of an Eastern sound in a Western context.

Harmonic minor is used over the V7 in a minor key. Everything else is included for completeness. If you ever need it it’s there, but you’ve got to be a real weirdo to grab for some of these obscure scales as your go-to.