Barre Chords on the Ukulele

A barre chord is one that uses a finger to cover a whole (or part of a) fret on your ukulele. You have to press down multiple strings with the same finger. 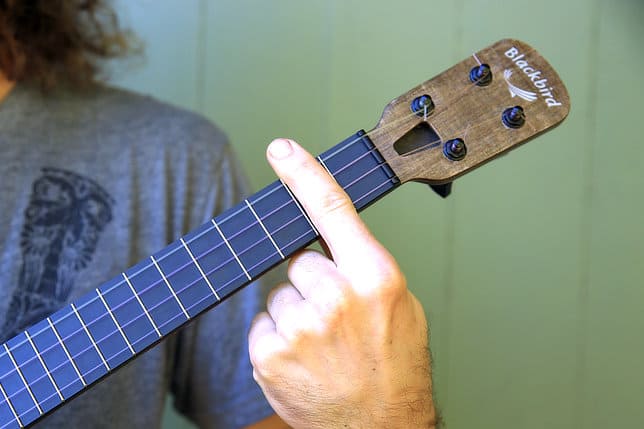 With a barre chord (sometimes misspelled “bar chord”), instead of using four fingers, you can use one to do the same job. This leaves other digits (usually the middle finger, ring finger, and pinky finger) available to hold other frets on the uke.

Unfortunately, when you barre on your ukulele, often times you get buzzing or thumping from frets that aren’t pressed down all the way.

As I explain in my giant, encyclopedia-like guide to left hand technique:

Since either are often a problem, many ukulele players get discouraged about barre chords and think of them as “too hard” or “advanced.” Some of the most notoriously hard ukulele chords contain a barre, like Bb and E.

Why bother with barre chords?

There are so many songs you can learn to play without barre chords that use open strings, why would you go to all that trouble when they can easily be avoided with different songs or with a capo?

The biggest asset of a barre is that it usually creates a moveable chord shape. This means you could hold the chord and shift it to any fret and get a new chord.

I wrote a whole book about this called ʻUkulele Chord Shapes.

The second, and more obvious reason is so that you can feel more confident with your playing. Just imagine if that E major chord was a piece of cake tomorrow! Wouldn’t you jump into learning some new songs right away?

So here are a couple tips to show you how to play barre chords on the ukulele.

Most people try to solve their problems when playing barres by doing the natural thing:

This only helps a small percent of the time since most often they’re pressing in the wrong place to begin with. By improving the placement of your finger in the fret, you can actually use much less downwards pressure than you think.

A finger on a fret can move in three main directions:

If just one of these are off, it can mess up the whole thing.

The first is pretty self-explanatory. If you’re here, you’ve probably tried it yourself. Simply squeeze your finger harder onto the fret to get a more solid connection with a chord.

Or, if your barre sounds good, try lifting up a bit so you aren’t wasting as much effort over-squeezing.

The second has a huge impact on how hard you need to press down on a fret.

If your finger is higher up (towards the bridge) inside the fret, you don’t have to press as hard because the string angle as it breaks over the fret is steeper. This means the string is more solidly pressed against the fret.

Try it yourself. Hold your ukulele so you have this side view of your finger: 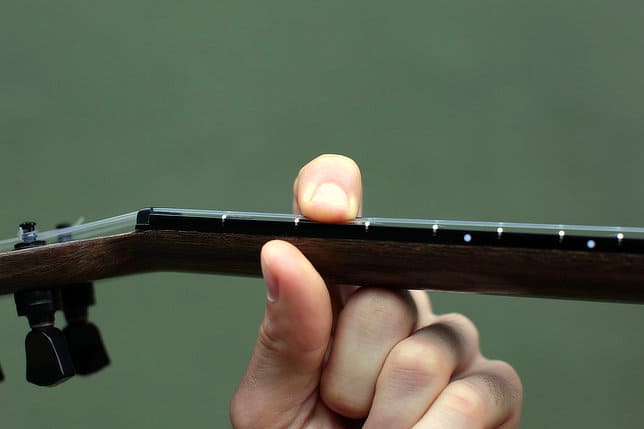 Then shift side to side inside the fret and watch what happens to the string as it breaks over the fret.

In the image above, my finger placement isn’t very good. I’m probably pressing harder than I need to if I fret here.

Of course, this is pretty easy with one finger. The challenge is to make this happen at every fret along the length of the barre. By holding the barre and picking each string one at a time, you can diagnose your buzzes or thumps and more effectively implement proper finger placement on your ukulele.

The third dimension is the least talked about in regards to barring. It changes where your finger joints cross the string.

If you hold a barre and a string goes into the crook of your finger, that string won’t be held as firmly against the fret. Plus, it can hurt your finger to press down when a string is in that bad spot.

The solution is to adjust your finger vertically so that ideally, every string is on the fleshy pad of your finger and not in a crook. 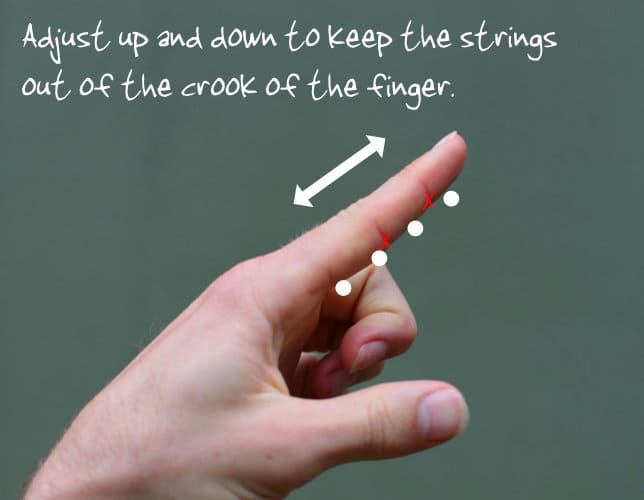 This looks like these two images when applied to your ukulele. Here’s a lower positioning: 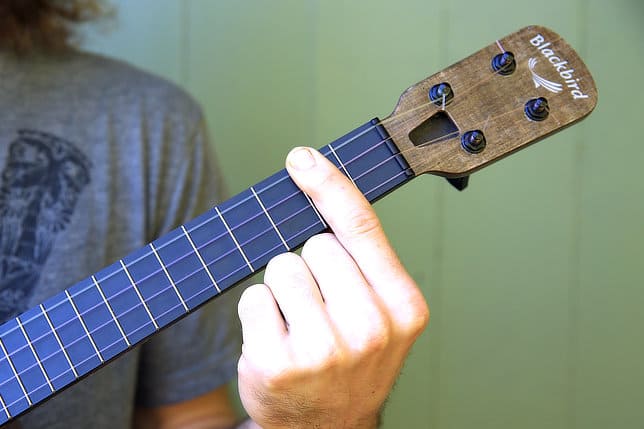 If your finger is just the wrong size for the string spacing of you uke and you end up with strings in crooks at every turn, try to find the least problematic placement.

Or, you could try angling your finger sideways so that the tip of your finger is higher or lower in the fret than at the base. This will change the length of your finger as it crosses the strings, but also puts one side of your finger fretting much lower and will need more downward pressure to compensate.

You can also try rolling your finger slightly onto its side so that your fret on the thumb-side of the finger. This will happen automatically if your posture is correct.

Be sure that your elbow is a couple inches from your side and your wrist flows smoothly from the elbow to the fingers without any sharp angles.

Pushing Instead of Squeezing Your Ukulele

When you get your finger placement optimized, the next trick is going to be putting the correct amount of downwards pressure onto the fret.

Some people have strong hands and can muscle this out, no problem. Others need to use a smarter fulcrum to do the work for them.

It’s usually easier to press the top half of a barre. The two top strings are often less buzz-prone than the lower ones.

Just look at how your finger naturally bends to pick something up. The tip is where the action is at!

Which is all to say, the base of your finger often needs extra help making contact with the fretboard. It’s not usually lack of power, it’s transferring that power to the right spot.

So I’m going to recommend something counter-intuitive: when you barre, push away from yourself with your thumb instead of squeezing with your fingers.

You should be pressing against the back of the neck with the pad of your thumb. If you rest the neck in the crook of your hand with the thumb over the neck, you WILL NOT be able to hold a barre with proper technique and will struggle to position your hand correctly. 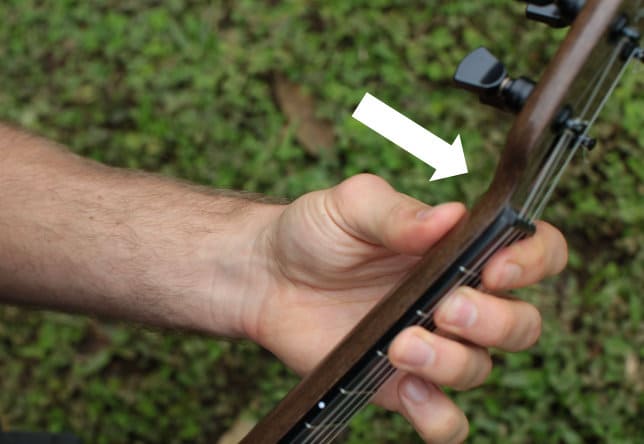 Here I’m holding a Bb which uses a partial barre. This chord benefits even more than others from pushing with the thumb since the first fret often buzzes.

Of course, your fingers need to be engaged or you’ll push your ukulele right onto the floor, but they usually don’t need to provide the main force. If you put them in place like a stopper and then use your thumb to push the neck into them, you will get the same amount of pressing force, but in a more optimized place.

By pushing with your thumb, you’ll naturally push upwards slightly, which, in turn, tucks your wrist in and pulls your fingers downwards towards the floor. This helps the fingers dig into the bottom strings and match the force that the upper part of the finger provides.

You can also try moving your thumb to the left of the barre finger by a fret or two to create more leverage when you push away. Only move a fret or two worth of distance from behind the barre: 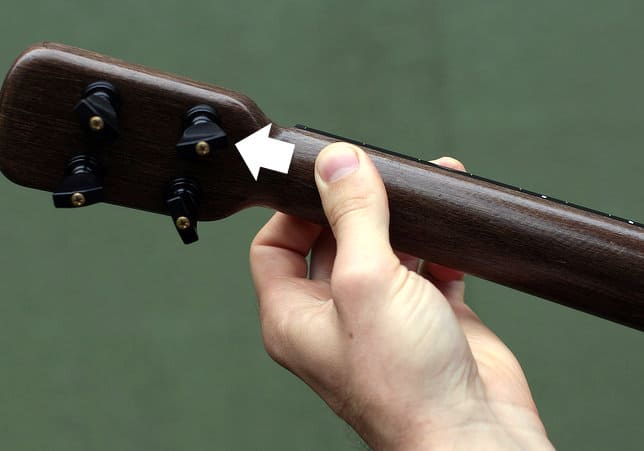 Some teachers recommend shifting your thumb the other way, to your right. This tweaks your wrist and creates tension in your thumb. Only place your thumb here if it’s comfortable and less than a fret higher than the barre finger.

In conjunction with proper finger placement, the thumb push should get you 90% of the way toward cleaner, buzz-free barring. If it doesn’t, spend some time examining exactly what is causing the problem.

Often we get impatient and try and force our way through challenges, but especially with something as finicky as holding ukulele chords, it pays to step back every once in a while and take it tiny piece by tiny piece.

If you hear a buzz or thump, pluck each string one at a time to hear where exactly it’s coming from.

Then look at the finger placement for that string. Is the finger too high in the fret? Too low? Are you straddling a crook of your finger?

By finding out exactly what the problem is, you can fix it.

Sometimes you just need more fretting power to make a barre happen. When this is the case, after trying the other methods above, reach for a double finger stack. 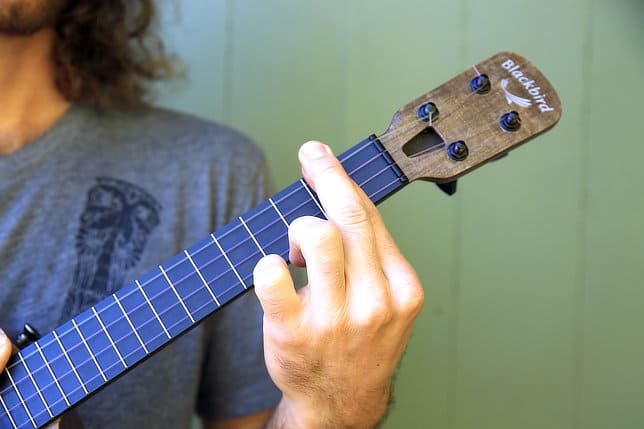 By crossing one finger over so that it rests on top of its neighbor, you can press down with the strength of both fingers. You can cross either the index finger or the middle, but most people barre with the index and use the middle finger to provide some help.

I’ve seen some people recommend pushing down with your right arm to leverage the neck of the ukulele outwards and thus provide more downwards pressure. While this might be helpful in the short term, it seems like a band-aid solution to me.

In all my years of teaching, I have no reason to believe that anybody except severe arthritis patients won’t be able to press down a barre after some practice by using just the fretting hand. By pressing down with your right arm you are introducing extra tension into your playing and dampening the soundboard from ringing as freely.

All this has been about playing barre chords on the ukulele so far. But what if you find a cool chord progression that you need to look up and you see a diagram like this: 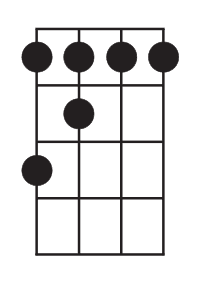 Usually when you see dots on the same fret in a row, it’s a barre (or can be a barre). In this case, you would barre across the first fret.

The inverse is sometimes true also. This is how I tend to write my chord diagrams: with one dot per string. It’s up to the player to figure out the barre.

Here the barre isn’t shown, but you’d normally want to place your index finger across the 2nd fret instead of trying to play each string individually.

Hopefully you are now better equipped to tackle ukulele barre chords when you see them on a chord chart or in a tutorial.

For even more on left hand fretting technique, check out my in-depth guide, Left Hand Technique For Ukulele.

Ads support the free content you are viewing! You can also leave a tip or purchase some of my premium content.