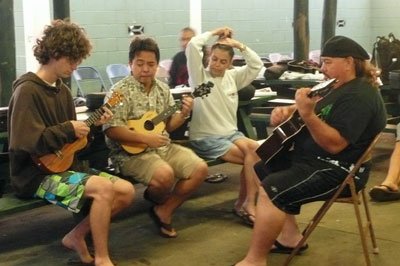 Jamming at a kani ka pila can be one of the most fun ways to share music and learn to play the ukulele. It’s a relaxed environment where beginners and pros alike can take turns leading their favorite songs.

By playing along you gain experience with new songs, chords, and rhythms. You also learn to play in a group. This is a total boon to beginner players. These are the kinds of experiences that quickly improve your skills and teach you all the things you’ll never learn playing by yourself – listening and watching other players. For a more advanced player, it’s a chance to explore accompaniment techniques, new chords, picking styles, and more.

Everyone jams a little differently, but often beginners wonder what to expect at such an event. Here is a look at how a kani ka pila usually goes down as I know it.

Most kani ka pila are laid out in a circle where everyone is seated, facing inwards. Nobody is performing and everyone is on the same level, able to see each other. This is not like a blues “jam” where people get up on stage and join the house band to perform for everybody else.

Whether two people or one hundred, the idea is similar.

In a kani ka pila, song leadership is usually passed from person to person around the circle. Sometimes, in a big jam with a time restriction, the jam facilitator/boss will ask if anybody wants to lead a song.

The great thing about kani ka pila is that it exposes you to new music from other people’s song choices. I know just as many Hawaiian songs from playing at kani ka pilas as from the radio. The diversity of individual music tastes helps keep obscure songs familiar. Especially in Hawaiian music where it can be hard to find recordings of certain old tunes.

If you want to lead a song, there are a couple things to keep in mind. (Taking a “pass” is fine too.)

You’re usually welcome to share song duties or request some help – IF others know the song. Don’t ask for help on something that no one will know. If you are a total beginner and know that the group plays a certain song, most seasoned jammers are happy to step in and lead for you if you make a request.

Depending on the level of the group, you can call for solos. This is a chance for advanced players to stretch beyond the simple chords and create interest in the song. Solos usually progress around the circle as participants take turns in the spotlight.

When you want to call a solo, think ahead and do so before the solo starts. This gives the soloist time to find their place and create a full musical statement. Otherwise, they will be playing catch up. Usually, calling out someone’s name and looking at them is sufficient. Just saying “solo!” is asking for trouble because, either no one will solo for fear of stepping on someone’s toes, or everyone will solo and it will be washed out and unsatisfying.

Kani ka pila circles tend to have a lot of beginners (which is great/the whole point). But beginners tend to play loud. When the ratio of singers to loud ukulele players is 1 to 30, it’s hard to be heard. If everyone knows the song, by all means play loud and sing your brains out, but if someone is leading a song people are unfamiliar with and you can’t hear the vocals, soft is way better.

Keep these things in mind and it should be easier to hear everybody when they need to be heard:

Play your ukulele quieter when:

Play your ukulele louder when:

Unless you play bass or steel guitar, amps are a no-no at a kani ka pila. Just getting acoustic instruments to blend is hard enough. If you think you deserve to be heard by being plugged in, you should probably be playing at an open mic instead of a kani ka pila.
Updated: October 13, 2021