If you’re lucky, plugging straight into an amp will make your ukulele sound great.

But more often than not, you’ll be hindered by the quirks and character of your gear. This results in a less-than-perfect sound.

The Gold In, Gold Out Rule

If you start with a great sounding pickup, there will be much less to fix along the way. It’s way easier to tweak a sound that’s already 90% of the way there than to try and manipulate a bad sound into greatness.

Be sure to do some homework on pickups and keep your expectations realistic if working with sub-par equipment. If your starting sound is garbage, you’re better off spending your money on a new pickup, not a preamp.

What Does a Preamp Do? 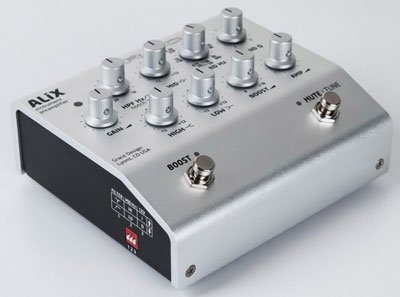 A preamp, in a limited sense, is a circuit that boosts and matches your signal with the input of an amp or PA. In most applications, an acoustic preamp comes with several tools to help you tune up your sound.

If your pickup has an output impedance that is higher than than the input impedance, you’ll have an impedance mismatch.

Impedance is the resistance of an electrical circuit, usually measured in ohms – shown as: Ω.

A mixer or amp usually expects a low-ish impedance source at its input. For instance, an electric guitar has around a 1-2kΩ output impedance. A microphone is even less, at 150-600Ω.

Contrast this to a typical passive ukulele pickup which provides somewhere around 1MΩ (that’s one million ohms)! The mixer isn’t able to handle such a large amount of resistance and this results in “loading” the pickup circuit.

When there’s an impedance mismatch like this, a handful of bad things happen, such as: low volume, loss of low-end resulting in a thin, “quacky” tone, and noise.

All that to say: a preamp is vital if your pickup is passive. An active pickup will already have a more reasonable output impedance (my LR Baggs Five-0 is 3.6kΩ), but can still benefit from the other features a preamp usually provides.

Some amps, like the Fishman Loudbox Mini, already have a super-high (10MΩ) input impedance. This means, you don’t usually need a separate preamp to balance the impedance, even if you have a passive pickup.

It Boosts the Signal

Impedance mismatching aside, a pickup often produces a weak signal. This requires cranking the knobs on a mixer or amp way up to get a reasonable volume. Pushing the controls like this doesn’t create the best possible sound.

Fortunately, a preamp has a gain control. This increases the input volume – or circuit sensitivity – which ups the output many times over.

Extra gain is great, but if you let too much signal into the circuit it will overload, causing what’s known as “clipping.” Clipping is when the top of the waveform is cut off, and it manifests as distortion.

Depending on the preamp, you want to set the gain control so that on your very hardest strumming, the signal clips slightly. This gives you the most possible boost with a reasonable amount of headroom left over.

An incredibly useful feature most preamps have these days is an EQ section. It’s possible that your pickup outputs a perfect sound, but not likely, which is why I always insist on EQ controls in a preamp.

Equalization sculpts the tone of your signal. It allows you to boost or cut certain frequencies.

I wrote more about EQ on my page about ukulele pickups:

Do I Need a Preamp?

It depends on your situation and the impedance of your pickup and amp or PA.

If you have an active pickup, you can usually run without a preamp. However, you might find the extra control a preamp gives you in volume and EQ is worth the hassle and money.

If you have a passive piezo pickup, the short answer is: YES, you need a preamp. These pickups can sound great, but they need an optimized environment to really shine.

That said, when the input is high-impedance, you might not need a preamp.

A high-impedance input can come in the form of an acoustic amp or as a high-grade, piezo-intended stage direct box. This type of direct box is few and far between so don’t count on them at a gig unless you’re Jake Shimabukuro and you ask specifically for it.

Preamps come in many flavors and the options can be overwhelming.

If at all possible, try your ukulele with any preamp you might want to buy. The way your pickup interacts with the circuit of the preamp is likely different than mine.

For example, here’s a comparison I did with my friend, Tobias Elof, of our preamps of choice at the time (Lehle Acouswitch Junior and LR Baggs Venue DI).

It’s subtle, but interesting to hear the difference in sound between two pedals that do almost the exact same thing. I’d expect this variety in signal coloration from any two preamps.

I’ve been plugging my ukulele in and performing onstage for a decade and a half. For the most part, I’ve “been there, done that” and have found what works best for me over the years. That’s exactly what I’ll recommend to you. It’s not that other preamps are BAD, I just haven’t used them or choose not to.

Personally, I require a parametric EQ section in any preamp I use. It’s the hands-down best way to fine-tune the sound of your pickup and make adjustments depending on the room. This is an EQ that lets you precisely select which frequency to boost or cut (other EQs have fixed frequencies – a less precise approach). 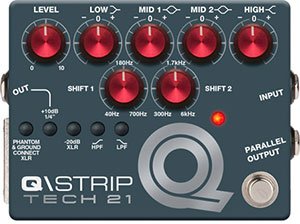 Currently, my favorite out of the six or so dedicated preamps I’ve tried is the Tech 21 Q\Strip.

It’s not an acoustic preamp, per se, but provides the key requirements and great sound. The input is rated at 4.7MΩ, which is sufficient for many passive pickups, there’s ample amounts of volume, a DI output, and two parametric EQ bands – along with high and low EQ controls.

The industry standard for middle-of-the-road preamps is the Para DI by LR Baggs. This is the easiest unit to recommend to anybody since it’s tried and true.

If you want something more fancy, I like the LR Baggs Venue DI. Though the tuner kind of sucks and, for the space it takes up, these days I’d probably just get the Para DI since the circuit is essentially the same.

Many preamps (including the Para DI, Venue, and Q\Strip) have an XLR output that sends a line level signal. This is commonly known as a DI – or direct input/injection. By utilizing a DI output you can provide a strong signal right to the mixing board and not worry about signal degradation along the cable.

This can be great if you play through a PA a lot. It reduces the need for an extra DI box. If you play mainly through an amp, you might want – or need – to use a 1/4″ cable anyways and the DI feature will be wasted.

The sound that is produced by the preamp will be basically identical whether using XLR or 1/4″. The only difference will be the level of the signal and how hard you have to drive the level. Often a pickup that is quiet over the 1/4″ cable will be plenty loud when using the DI out.

My main rig for the past few years has been the HX Stomp from Line 6. It has a 1MΩ input, which isn’t enough for a lot of passive pickups, but could be enough depending on your model – especially if you have an active pickup. It does everything and is quite expensive. I don’t recommend it for hobby players, but if you want the best for performing, I haven’t found anything better.

Everybody has their own needs and preferences with gear. As such, there are many options suitable for an ukulele preamp. However, finding them is difficult. They seem to get buried under the hype of electric guitar pedals.

I figure it can’t hurt to put together as comprehensive a list as possible of acoustic instrument preamps. “EQ” assumed to be fixed-band based (parametric shown as “para-EQ”). Possibly better options for uke in bold.

If one of those doesn’t meet your needs you’re in serious trouble!