How To Solo On the Ukulele – Basic Lesson 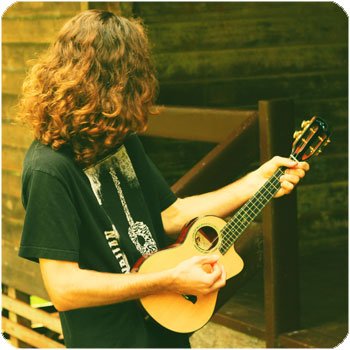 A solo usually refers to an instrumental break in a song that features one or more of the people playing. It is either planned or improvised – composed entirely on the spot. A solo is a chance to differentiate the song by shifting melodic focus to an ukulele or to let the player cut loose and “show off” in an instrumental tune.

For this lesson we’ll focus on improvising. Improvising can be a good deal harder than just playing a pre-arranged lead, but doesn’t have to be complex or technical as most uninitiated people seem to think. The only difference between playing the two is that you come up with an improvised solo on the spot and a “written” solo is just that – composed and learned ahead of time. One is hopefully not better than the other sound-wise, but, in general, improvising takes a lot more practice and is thus, more impressive and musically telling of the musician.

There are no right ways to solo. If it sounds good – great! If not, keep practicing! However to write a lesson about the concept I’ll have to simplify some things quite a bit and approach it in a more classical way.

A Solo: The Big Picture

You can do anything you please when you play a solo, but there are some commonly accepted standards that most people choose to follow.

A solo is a story. Like a story it’s nice to have a beginning, middle, and end. You need to introduce the main ideas, build up the story until you hit the peak, and then bring the whole thing back down to wrap things up. Getting to these points at the right times and with the right energy is probably one of the hardest parts of soloing. When you do it right everyone knows.

It takes a while before you learn to steer the feel of your solo, but the sooner you can start trying to lean your solo into certain intentional directions, the better. For example, a feel might be moody and quiet or screaming bends to express teenage angst or like Jimi in his version of the “Star Spangled Banner”.

An ear will be tuned to the key of the song by the time a solo comes around so it’s usually a decent idea to remain in the same ballpark. Not to do so would turn some heads, but maybe not the way you want. So that means you’ll need to know what key the song is in for a head start.

Improvising exactly what you hear in your mind’s ear takes a long time to become competent at. However, it takes very little skill to start jabbing around in the dark for notes and patterns that sound good.

Dare to suck. I heard this a while back and it really captures what the attitude of starting out in a certain musical skill should be. Unfortunately, many people are scared to make mistakes and experiment. It’s as if they’re afraid somebody might die if they play the wrong note. That’s silly – so stop stressing about mistakes! If you’re worried about being heard, drive into the boonies and sit in your car and practice. (Cars are the most soundproofed space available to the average person).

To solo in a song you need to know a few things:

The key of a song is the sequence of sharps or flats together that make a scale sound nice when starting from any note (that first note would be the name of the key). For our purposes, we’ll assume that you know how to figure this out. Not sure? Follow the link below and work it out yourself, look it up, or ask another musician.

Tips For Figuring Out The Key
Hint: the 1st is practice! :-)

Once you know the key of the song you want to solo in, you’re well on your way to finding the notes that work best in the key. This is usually the scale that fits easily over the key. In a major key this will be a major scale started from the note that the key is named after. In a minor key, use a minor scale. We’ll talk about exceptions later.

If you’re ripping a solo in the key of G, you could typically use any of the notes in a G major scale to get the job done.

Give it a try! Youtube (or Google) is chalk full of backing tracks in various keys. You can use whatever you like, but I found the one below with a quick search. To get started, just put it playing and noodle around with the G major scale using the notes of G A B C D E F# G. Remember: Dare To Suck! You won’t know what the heck to do at first, but try and listen for what sounds nice and revisit it intentionally.

Acoustic Rock Backing Track
In the key of G.

Let’s refine our approach a tad. All the notes in a scale work in a pinch, but you’ve probably noticed that some sound better than others. Odds are these are chord tones you’re hearing. By emphasizing these notes your solos will sound way more collected and “pro.” You don’t want to use them exclusively all the time – that would be boring – but for starting or finishing a phrase, these chord tones are almost guaranteed to be a hit.

We’ll continue to use the key of G for examples.

Let’s break it down: You can melt down a G chord and play the notes that make it one at a time. This is an arpeggio. Even without knowing what the notes are called, your ear will guide you to finding these sounds on the fly. They will sound the most consonant out of all the notes in the scale.

But for the analytical minds, let’s look at the theory.

A major chord is made up of a 1 3 5 formula. That means that you take the 1st, 3rd, and 5th notes out of a scale and put them together to get a major chord.

Chord Theory
Lost? Brush up on your chord building skills.

Pull those notes out of a G scale like this:

G B D. Bing. Those are your chord tones. You’ll use those when playing over a G chord for extra sweetness.

Here’s a sheet showing the chord tones highlighted for a I IV V progression in the key of C. The C scale is used throughout, but the highlighted notes change depending on the chord you’re over at the time.

Another example (in A minor using the Am scale):

There are many different scales that you can use for getting different sounds. Major scales sound good over Major chords (go figure). The Major Pentatonic sounds best over Major and Major 6 chords. The Minor Pentatonic sounds good over Major, Minor, Minor 7, Minor 9, Minor 11, Minor 6, Minor 6/9, Minor 13, and Dominant Seventh chords. The Minor Pentatonic is great for soloing in blues and rock songs. There are many others that you can learn. If you would like to learn them I would suggest getting a chord and scale table that shows how to write scales and what genre and chords they work well with (this is a fairly standard music store item). I have put the notes of some of the scales up on a scales page.

To make a scale work for soloing you need to emphasize some of the notes. In his lessons, Herb Ohta Jr. suggests starting and stopping riffs on the notes of the chord that is being played (if you are soloing over a C chord, start and stop on the notes: C-E-G). This is important to making your solos sound smooth, so practice starting on the chord notes, and stopping on the chord notes. If you were to end a line on an off note, you probably will hear an unresolved sound. This can be a good thing and used to push the next phrase along. A way to think of it is:

The sense of “what comes next” is something that you develop as you log more and more hours of practicing. It’s not just playing a note and hoping that it sounds good, but hearing somewhere off in your head or heart what should be played next – “hey, this would be cool!” Listen to Carlos Santana; the guy is the most phenomenal soloist you will ever hear.

Repeating ideas is okay too. If you play a really sweat phrase, play it again in the next measure, maybe you can build other ideas on it.

Don’t play up and down scales. A scale is not a solo. Just because you use a scale in a solo doesn’t mean you should play up and down that exact scale. We can all sing “do re mi fa sol la ti do”, so do something different. Interval jumps make for very interesting and beautiful sounds. A great example of a soloist that jumps to the good notes without playing something up the scale is Eric Johnson. He is a very underrated guitarist who plays consistent melodic solos with big intervals (“Bristol Shore” and “Trail of Tears” have great solos).

Practice is the only way to learn this, so jam with your buddies or along with a recorded song as often as you can. This will teach you what sounds good and what doesn’t.

This article is far from complete. Soloing is such an “experience” type of thing that it is almost impossible to teach. I’m sure as I improve and learn the whys and hows of soloing I can add to this, but for now here are some more pages that have to do with soloing: