How to Play a Hammer-On: Ukulele Technique

A true fundamental ukulele articulation and usually one of the first to be learned, a hammer-on transitions from a lower note to a higher note utilizing one attack for both.

Since you don’t pick the second note, you can essentially hammer as fast as your left hand allows. It helps you play faster, but can also get you from one place on the fretboard to another smoothly.

While you pick the first note normally, the second note of a hammer-on is not attacked. This is the whole character of the technique.

If you pick both notes you’re just shifting frets normally. The energy of the first note is carried over to the next by the hammering finger.

The sharper and stronger your hammering motion, the louder the second note will ring.

Start by placing your middle finger on the second fret of the bottom string of the ukulele. Pick the note. 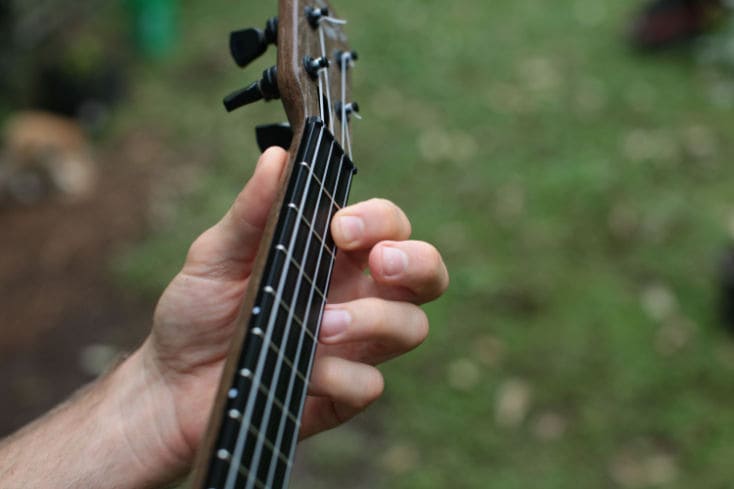 Then, while it is still ringing, add your ring finger quickly onto the third fret with gusto! Don’t pick this second note. 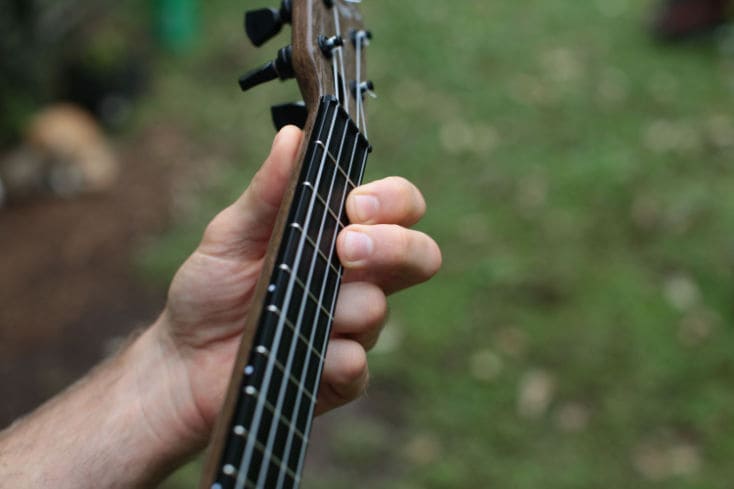 If you did it right you will hear an almost-instant transition between the two notes.

When you first try this technique, the hammered note will probably sound weaker than the first, plucked note. With practice you can bring the power and projection of this note up by making your movements as efficient and strong as possible.

Hammer-ons are notated in tab and standard notation as arcing lines that connect two notes – known as a “slur.” Sometimes there will be an “h” above it, sometimes not.

Here’s what the above example would look like in ACSII tab:

Practice these one at a time repeatedly until you can get a clear sound.

When playing a hammer-on on your ukulele, you’ve got to look ahead and set yourself up so that you can finger the notes correctly without backing yourself into a corner.

Always be sure to fret the first, lower note in the hammer-on with one of the lower fingers of your hand: index, middle, or ring (rarely). This gives you space for the next note to be played by a strong finger.

As you get better you can use the hammer-on motion with more of your fingers.

Here are all of the possible hammer-on finger combinations you could use. Practice them all:

As you get comfortable with a single hammer-on motion, you can add to it by hammering more than one note in a row.

For instance, you could pick the first note here and then hammer once, then again, without a second or third pick.

Try playing any three adjacent notes from a scale on the same string using two hammers to move between them.

The trill is a variation on the hammer-on played in conjunction with a pull-off. It’s a rapid, back and forth transition between two notes that repeats as quickly as possible.

They aren’t used a lot in ukulele music, but have their place in the classical genre – or even metal. The trill is a flurry of hammer-ons and pull-offs with only the first note picked to get things going. You can trill between any two notes on the same string.

To play a trill:

Remember that a trill is still shown in notation “tr“. I’m just trying to give you an idea how it is supposed to sound when you play it on your ukulele.

This can be played anywhere on the fretboard. Make sure that your pull-offs really pop because that is what keeps the sound going.

This is a great way to exercise you fingers.