A chord on the ukulele is a combination of notes that are strummed all at the same time. These are created by pressing the strings down on certain frets. Each formation of fretted notes is what’s known as a chord.

This page will show you a handful of must-know basic uke chords and link you to more advanced charts. These include multiple position charts for learning alternate voicings. 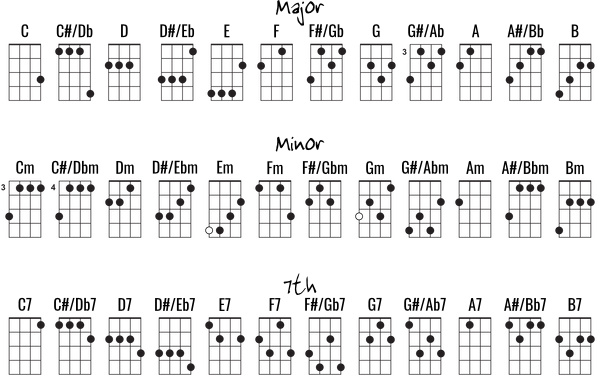 You’ll want to eventually learn the most common ways of playing all the major, minor, and 7th chords. There are 12 of each so you’re looking at memorizing 36 different fingerings.

This is a lot of work so don’t try to do it all at once! Learn songs that gradually introduce new chords so you can learn them in context.

What is the easiest chord on ukulele? This has to be C6. It sounds fancy, but it’s not. C6 is the same as strumming the open strings of the uke: GCEA.

These notes also make up an Am7 chord and an Fmaj9 chord. So just by strumming without any fingers on the fretboard you get three chords.

Even though you’ll use major, minor, and 7th chords most frequently, you might want to play higher inversions or add a jazz chord family here and there.

When you’re ready to make that leap, I recommend you check out my book, Ukulele Chord Shapes. As far as I know, it’s the most comprehensive chord book available to uke players.

If you really want to dive into complex voicings and harmony options while also learning how the fretboard works, check it out here: 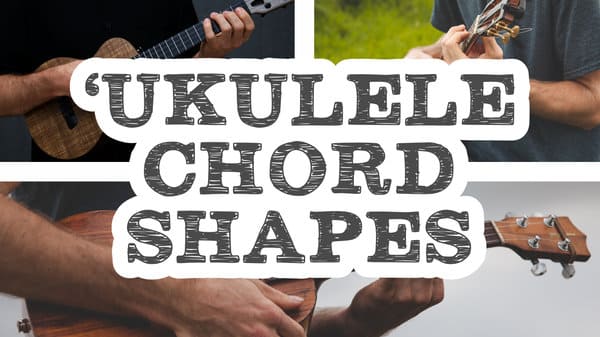 A neo-traditional chord reference book. Learn to create 2,268 chords out of 189 moveable shapes and learn the theory behind the magic.

Short of the beautiful layout of Ukulele Chord Shapes, here are some old charts that show uke chords sorted by family and presented as multi-position PDF charts.

A basic video overview of some things that affect how well a chord rings out and how to make changes easier.

If you liked this video, its concepts and much, MUCH more are explored in depth in my video course, Left Hand Technique For Ukulele.

How to Read a Chord Diagram Box

Chord diagrams are handy and probably the easiest way to show finger positions on the fretboard. This is due to the fact that a chord box looks just like the fretboard and has dots on the frets where your fingers should go. It’s very intuitive.

An ukulele chord diagram is made up of a grid. Four vertical lines represent the 4 strings of an ukulele. On the left side is the G string. C and E follow, and on the right side is the A string.

Completing the grid are the horizontal lines that represent the frets, starting at the nut and making their way up the neck at even intervals as far as you need them two, though five lines is the most common.

Finger Dots are the last component of a chord diagram. These are round, usually black, dots that go on the string line and in between two fret lines. Each dot shows where you put your fingers.

Sometimes the finger dots have numbers in the middle. These are guidelines as to what finger to place where (1=index, 2=middle, etc…).

There are instances where a barre across several strings is necessary. This is shown with either multiple dots across one string (in which case you have to determine if you need to barre), or as several dots bound together to visually form a bar.

At the very top of the box is the chord name. This tells you what chord the box shows.

Sometimes, if the diagram is showing a section of the neck where the nut is not the lowest fret line, a number is shown to the left or right of the chord to tell you which fret to start the shape from.

The above chord diagrams are awesome for learning chords, but are not very practical when you are trying to explain something in a plain text format (song sheet, forum post, etc…). Sometimes you will see a dedicated person take the time to format a chord like this:

But it would be easier to just notate it like:

Each number space indicates a string. On the left is G, on the right is A.

Each number itself shows what fret to play (0 = open string). So for this example you would play the G string, 2nd fret, the C string, 1st fret, and leave E and A ringing open. The best example of this format I can think of would be GX9901’s explanation of “Trapped” by Jake Shimabukuro.

Learning to play ukulele chords is great, but you need some context. Here are some lessons on ways to use chords and understand them better.

Barre Chords – Tips for how to hold these tricky chords better and easier with lots of illustrations.

Constructing Chords – How a chord is created from a scale and a formula.

Diminished and Augmented chords – The funny sounding crew. Hard to use, but their shapes repeat so memorizing them is easy.

Hawaiian Vamp Chords – Also known as a “turnaround,” the Hawaiian vamp is the glue that holds traditional Hawaiian songs together.

Jazz Chords and Progressions – A guide to learning jazz shapes and applying them to progressions.

Power Chords – With only a 1 and a 5 you can blast yourself through some rockin’ tunes.

Resolving 7th chords – How to use a 7th push to lead your ear to the next chord.

Slash Chords – Easy for piano, hard for ukulele. Here are some tips to defeat the mystery of the slash chord.

As far as I know, my book, Ukulele Chord Shapes, is the most extensive ukulele chord book around. That said, its method has a bit of a learning curve and might fly over the head of a beginning player.

A neo-traditional chord reference book. Learn to create 2,268 chords out of 189 moveable shapes and learn the theory behind the magic.

If you are in the market for a book that shows single-use chords, my favorite is Roy Sakuma’s Treasury of Ukulele Chords. A chord book of some type is really good to have!

Sometimes it’s super handy to have pre-made blank diagrams to note chord shapes on. They’re great for study and reference.

I created a variety of options to fit most needs. All print to a standard 8.5×11″ piece of paper. The numbers show how many columns and rows of blank box diagrams there are on each sheet.